Video of this song from youtube
Average Rating : 4.51
Total Vote(s) : 81
Please rate this song between 1 star and 5 stars (5 stars being the best). Just move your mouse on the stars above and click as per your rating. Your rating will really help us to improve our website. 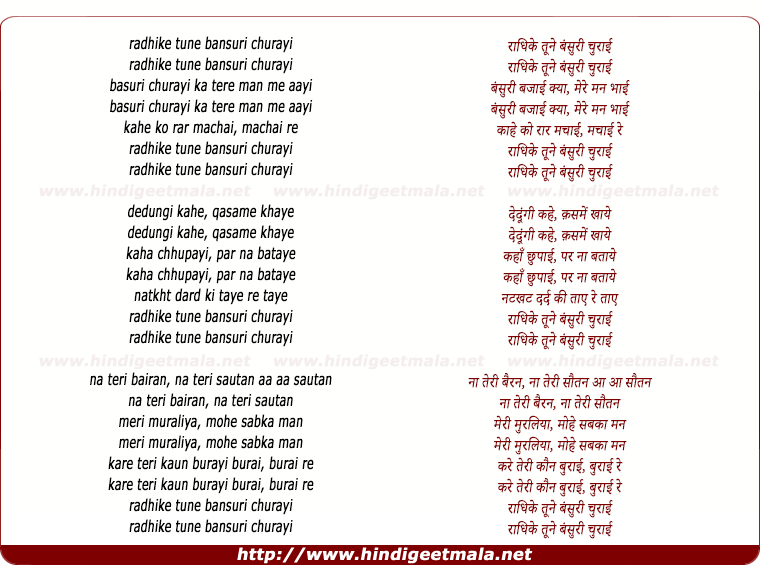 Comments on song "Raadhike Tune Bansuri Churaai"
Maruti Rao V on Sunday, November 06, 2011
Look at the magnificent way Sunil Dutt emotes and B.saroja Devi acts and
dances like an angel and the music by Shankar Jaikishen and effortless
singing by Rafi saab the legend and history is made. Can any one easily
forget this song in his lifetime?. S-J were great and Rafi saab greatest
and the combination out of this world. I am completely mesmerized. I cannot
keep myself away from this song and keep on hearing for hours. Magic!

Satish Sachdeva on Saturday, August 31, 2013
NO VOICE AND SINGING STYLE CAN EVER MATCH LATE RAFI SAHAB'S VOICE. HE IS
GOD OF SINGING. BOLLYWOOD CERTAINLY MISSES HIS VOICE TODAY. HIS SONGS WERE
ALIVE, ARE ALIVE AND WILL REMAIN ALIVE AS LONG AS THIS UNIVERSE IS THERE.
SEE HIS RANGE OF SINGING, ROMANTIC, CLASSICAL, BHAJANS, FAST, SLOW,
QUAWALLIS, GHAZALS, ANY SONG, HE IS SAMRAT.

MrPartha56 on Friday, August 13, 2010
It is a voice that has no comparisions--then and now and for ever!! It can
sing any song with ease and melody automatically pours from
it--overwhelming the listeners and take them off their feet and putting
their minds in a transcendental condition!!

Nayyar Kamal on Sunday, June 16, 2013
SJ enjoy the previlege n credit for having composed the highest no.of
classical based songs in film music.Each of their song is a GEM of
composition they are un-questionably among the greatest maestros of India.

shripad20 on Friday, July 24, 2009
What a song!!! Really gr8.Rafi sahab has sung it so beautifully that one
would zoom in joy!! Shanker-Jaikishan are really uncompareable. A fantastic
upload,Thanks a lot