Video of this song from youtube
Average Rating : 4.29
Total Vote(s) : 287
Please rate this song between 1 star and 5 stars (5 stars being the best). Just move your mouse on the stars above and click as per your rating. Your rating will really help us to improve our website. 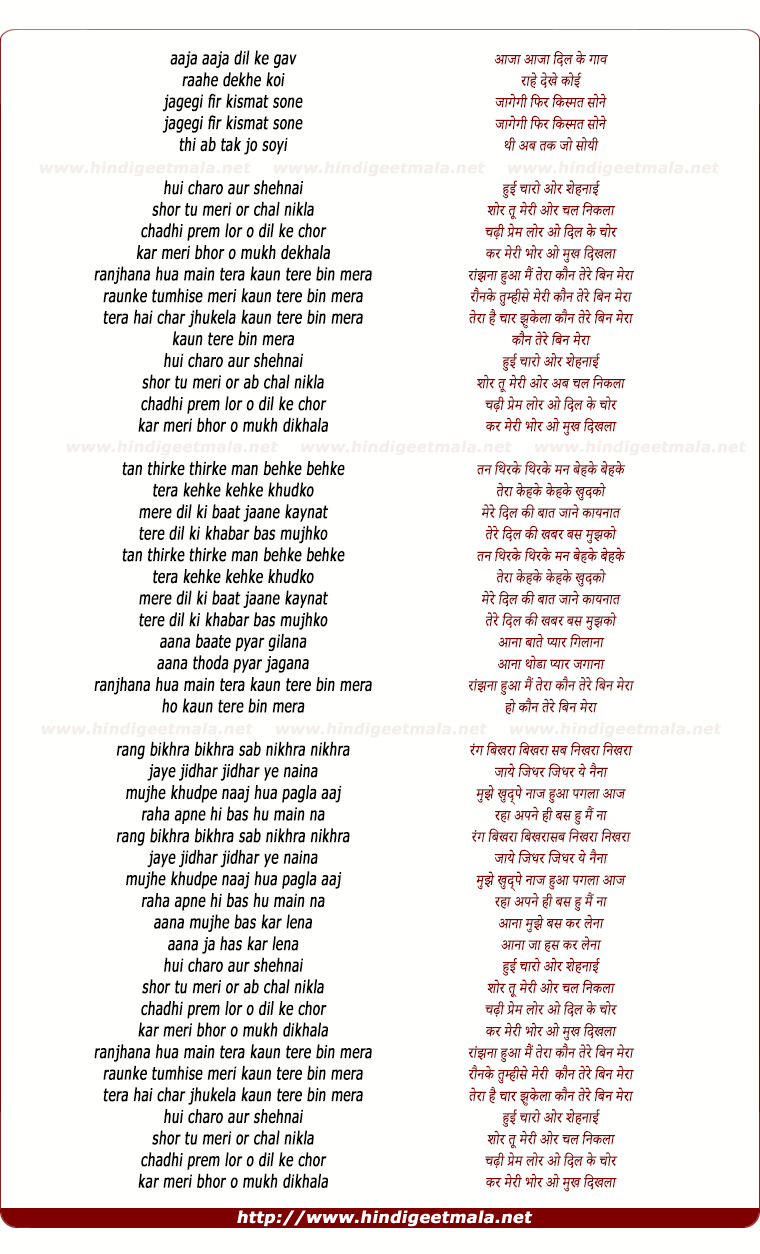 Comments on song "Raanjhana Hua Mai Tera"
Shilpiinurface on Thursday, June 27, 2013
Dhanush, is a legendary in the making.he not only acts/performs incredibly (a National Award winner) but he's a lyrcist in his own language and a singer, 'the Kolveri' dude, that won him overnight worldwide recognition...everything this dude touches turns to GOLD..YEAH.I would RATHER LOOK LIKE HIM and achieve all this than to look like a HOTT untalented bodybuilding dingy schmuck if I was to be an actor!!! FROM NY and NORTH INDIAN!!!!!
Vikram Kant on Thursday, June 27, 2013
Why rickshaw drivers, laborers n barbers aren't human? What a sorry life
you must be leading! So what next the South Indian Superstar is paying
people to watch it n make the movie a hit too? The SI Superstar is Shivaji
Rao Gaikwad, a Marathi born n raised in Bangalore n Dhanush a star even
before he married. Does all that even matter? Low lives like you can be
dispensed off this earth. We don't need scums like you in the society.

Anup Kumar on Saturday, May 18, 2013
Those who are criticising Dhanush remember one thing.His Song "Kolaveri" is
the biggest hit song of India with over 6.8 crore views till date and still
counting. He made us Proud. I am a North Indian from Banaras. Welcome to
Banaras Dhanush. Hope this movie opens the door for more Bollywood movies
to be shot in Banaras. HAR HAR MAHADEV. JAI GANGA MAIYYA.

Anup Kumar on Tuesday, May 21, 2013
DHANUSH and MSD bridging the North South gulf. MSD playing for CSK and now
DHANUSH playing a character of Banaras youth in the movie. Hope when i go
back to Banaras, all youths of Banaras including me would be dancing to the
tunes of Raanjhnaa hua main tera. Want DHANUSH Sir to come again to BANARAS
and shoot another movie.Let Banaras be your second home.

utkart on Wednesday, June 26, 2013
What a wonderful comment you have given about dhanush. This guy became
popular in Tamizh because he looked like a man that crosses us in road. His
movies would have raw actions and street style dancing and fights. But
overall his natural ability to act is extraordinary. Look for a movie
called 'mayakam enna' that came in 2011.