Average Rating : 4.38
Total Vote(s) : 52
Please rate this song between 1 star and 5 stars (5 stars being the best). Just move your mouse on the stars above and click as per your rating. Your rating will really help us to improve our website. 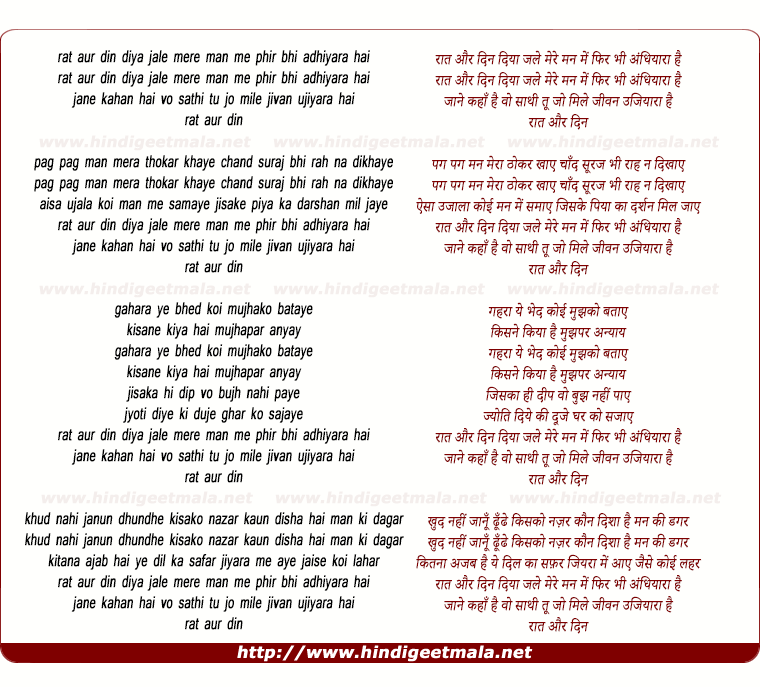 Comments on song "Raat Aur Din Diya Jale, Mere Man Me Phir Bhi Andhiyara Hai (By Lata)"
Subhash Kothari on Thursday, August 13, 2015
Mahaleji, I was under impression that this beautiful song written by
Shailendraji. As such lyrical wordings are pretty much similar to hime (
Shailendraji). This one is one of my liking songs. Kavi Hasratji is also
beautiful and seasoned Love song writer. This reminds me another Lataji's
song and same song is also written by Hasratji. The movie was released and
Dev Anand - Asha Parekh were hero - heroine. Songs were released in
1968-1969. The wordings were pretty much similar to this song. ( Zindgi
Sahera bhi hai aur Zindgi Gulshan bhi hai.. Kahin aur Chal)﻿

Mani Menon on Monday, January 07, 2013
What a fantastic song! Quintessentially Shankar-Jaikishen / Shailendra at
their creative best. One can feel the mist as Lata sings in her golden
voice. I had seen 'Raat aur Din' and had enjoyed it. Nargis put in her
best, though she was clearly over the hill. Pradeep Kumar too was no longer
the young handsome hero. To counterbalance this, there was this young
shamelessly handsome Feroze Khan! 'Raat aur Din' didn't go down well with
the moviegoers as the story dealt with Nargis' split personality

crazyoldsongs on Saturday, January 05, 2013
when we walk in the woodlands of a hill station ,we see the play of the
clouds gliding through hither and thither and it seems that we are walking
in the clouds ! i have experienced this phenomenon many times when i was on
a vacation with my parents as a child in nainital and mussoorie ! . so
surely this is not a forest fire or smoke :)

rumahale on Monday, January 07, 2013
Well said of Raat Aur Din, the particular song and the stars. This is one
of the songs being heard by me regularly. It is also ironic that the movie
was not cmmercially success, but Nargis won the National Award for Best
Actress category. Thank you for excellent response.

rumahale on Saturday, September 19, 2009
Thanks for liking and comments. As regards video on Mukesh number it is not
available on YouTube. If you have DVD, can think of writing on hard disk
that will facilitate in uploading. I can co-operate. We don't get DVDs of
old Hindi movies here. Regards.