Video of this song from youtube
Average Rating : 4.58
Total Vote(s) : 50
Please rate this song between 1 star and 5 stars (5 stars being the best). Just move your mouse on the stars above and click as per your rating. Your rating will really help us to improve our website. 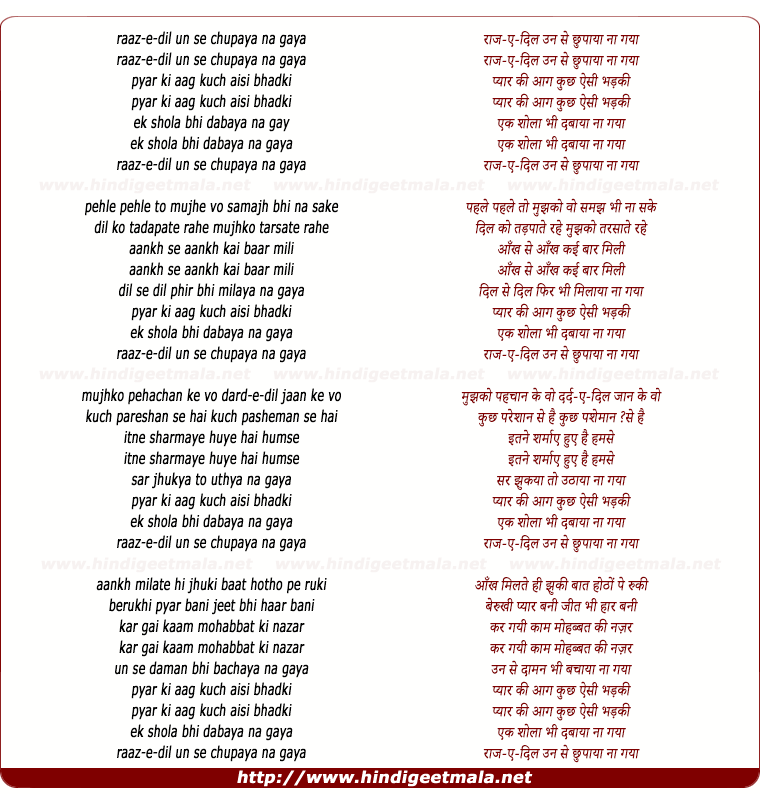 Comments on song "Raaz E Dil Unase Chhupaayaa Naa Gayaa"
khushy100 on Thursday, September 23, 2010
Mera pyar Rafi Sahib se chupaya na gaya. Magical song from one and only Mohammed Rafi Sahib, that is outcome of love when Mohammed Rafi Sahib put those into song. It has that beat and lyrics which makes one listen to it over and over again, naturally in you understand the meaning of these lyrics. Dear Iftekhar, thanks for uploading this song, it is just a magic with magical voice. Khushy 100.
gauri1971 on Wednesday, November 18, 2009
today again I felt like listening to this gem. Everytime I hear this song,
I start shivering. Rafi saab's magic has gone an extreme in this one.
Really a gem. This kind of fine work is possible only with God's special
blessings. My God Bless Rafi saab and everybody around him.

Balakrishnan V on Saturday, December 03, 2011
This melodious song is from the film Apna Banake Dekho,starring Manoj &
Asha Parekh. Whwnever,l listen to this song, whole day I will be humming
the same song.Ravi has given a lovely song. I it possible to upload video
of this song?

SeaBreezeCenter on Wednesday, November 18, 2009
Thanks for your devoting comments. Rafi Sahib really played magic which is
beyond comprehension. No doubt he had God's blessing with him. God may
bless him in heavens as well. Aameen.

shripad20 on Wednesday, August 19, 2009
fantastic song!!! What a melody,words really fabulas. A great composition
from Raviji.Thanks to Rafi sahab for singing this & so many beautiful songs