Video of this song from youtube
Average Rating : 4.62
Total Vote(s) : 21
Please rate this song between 1 star and 5 stars (5 stars being the best). Just move your mouse on the stars above and click as per your rating. Your rating will really help us to improve our website. 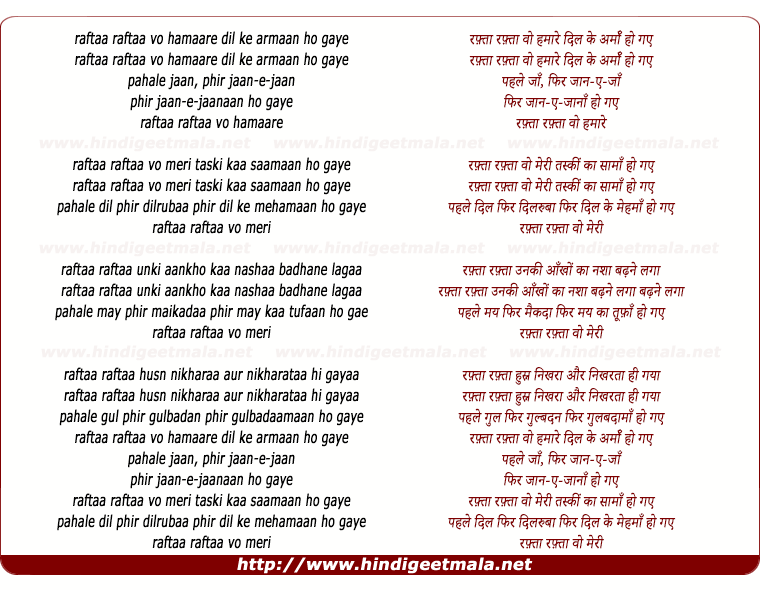 Comments on song "Raftaa Raftaa Vo Hamaare Dil Ke Aramaan Ho Gaye"
Rmehtacpa on Saturday, October 30, 2010
YES, This is the audio version. As I have left a comment on video version,
this audio/disc version is a bit diff too and even better except that the
recording here on this upload is not good enough.

durlabh kolhe on Monday, August 16, 2010
@crazyoldsongs satraj1961 is my FB friend i.e. satyajit Rajurkar, I request
him to upload some songs thar are not available on YT and are available
with Satyajit. I am also a fan of this song.

crazyoldsongs on Saturday, August 14, 2010
@durlabhpkolhe dear sir , i have been looking for this song for quite some
time but as i clicked on your channel i found it ! thanks and thanks also
to satraj1961 for uploading

TheRohanSaraf on Monday, July 26, 2010
Can someone pls advise me on how can I get hold of a copy of this movie "Hum Kahan Ja Rahe Haine" and it would mean the world to me!
durlabh kolhe on Tuesday, June 15, 2010
sweet song likes me since 1966-67, a rare gem by basant prakash [brother of
khemchand prakash]