Video of this song from youtube
Average Rating : 4.52
Total Vote(s) : 106
Please rate this song between 1 star and 5 stars (5 stars being the best). Just move your mouse on the stars above and click as per your rating. Your rating will really help us to improve our website. 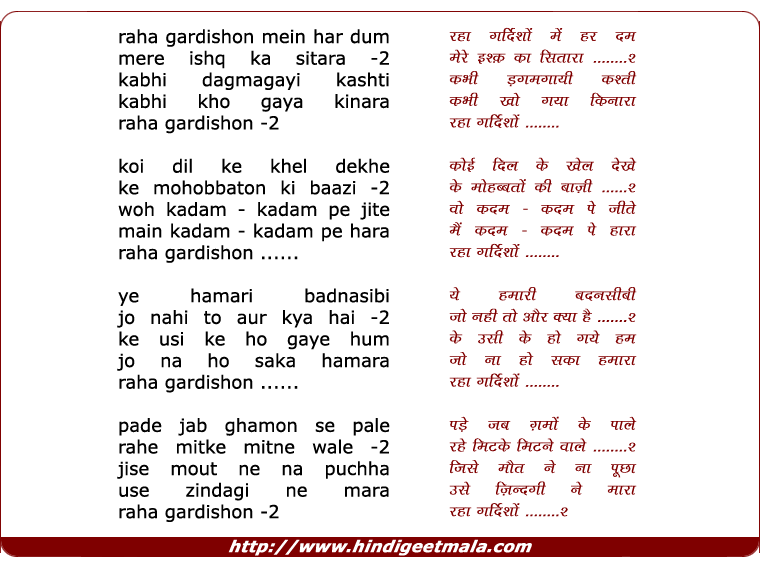 Comments on song "Raha Gardishon Mein Hardum"
Nitin Modi on Saturday, January 31, 2015
Mohd rafi saheb was beyond any bharat ratna after 35 years of his death
billion of people still listning song sung by him what else one need, he
will be alive in heart of people and not only hindi & urdu knowing people
but other language speaking too his voice was always coming straight from
bottom of his heart and touch the listner's soul his range and versatility
is beyond compare with anybody of his time singers not before too forget
about today or future and he was such a gem of a person never went behind
money never done any sort of poltics like other singers he was khuda ka
bheja hu a fakir we are fortunate that he was born in our country﻿

PONNADA SRINIVASPRASAD on Sunday, August 03, 2014
only Rafi could deliver such melodies with intensity and from the bottom of
heart and is testimony of vocal prowess and contemporaries such as Mukesh,
Kishore, Mahendra, Manna dey are little match. Indubitably, Rafi has been
gifted with versatility, melody, range, depth and strong vocals coupled
with good heart and delivery style, Union Government failed to recognize
this SON OF THE SOIL from Film firmament.FORGET BHARAT RATNA, EVEN
DADASAHEB PHALKE AWARD HAD NOT BEEN CONFERRED SO FAR AND LESSER MORTALS
SHOWERED WITH HANDFUL AWARDS. DID RAFI NEED TO PROVE HIS METTLE,
CONTRIBUTION. UNION GOVERNMENTS ALWAYS DITHER
Reply
·﻿

Rashid Aleem on Sunday, April 24, 2011
Whenever I am watching this song, the face of Bride remind me about her (MY
LOVE). This heart break / disaster was happened with me, just because of my
one mistake I had stuck in Europe due to non-availability of passport, I
was got late & finally I had not reached in time to save MY LOVE and some
one took her (MY LOVE) away. I always realized that & agreed that was my
fault, please forgive me, definitely we will get together in near future.
May God bless you good health.

nawabshaukat on Tuesday, June 16, 2009
Raag DARBARI based a unfogetale song of a composer RAVI he was the composer
whose most of the compositronz are based in raags and melody of the song is
not destroyed even the people who are not familiar with classical raagz and
thaats loved his songs and if that song is sung by ONE AND ONLY RAFI SAAB
like this song tou wah kya baat hay tareef ki zarorat hi naheen 03332604292

doodles1979 on Tuesday, September 30, 2008
My lovestar was always stuck in misfortune sometimes the ship shook in
turbulent waters sometimes it lost sight of the shore Watch this game of
love In this gamble of hearts She won each step while I lost each It is my
bad luck and nothing else That I belong to the one who will never become
mine Some people grow up with sorrows Death didn't bother me but Life has
killed me