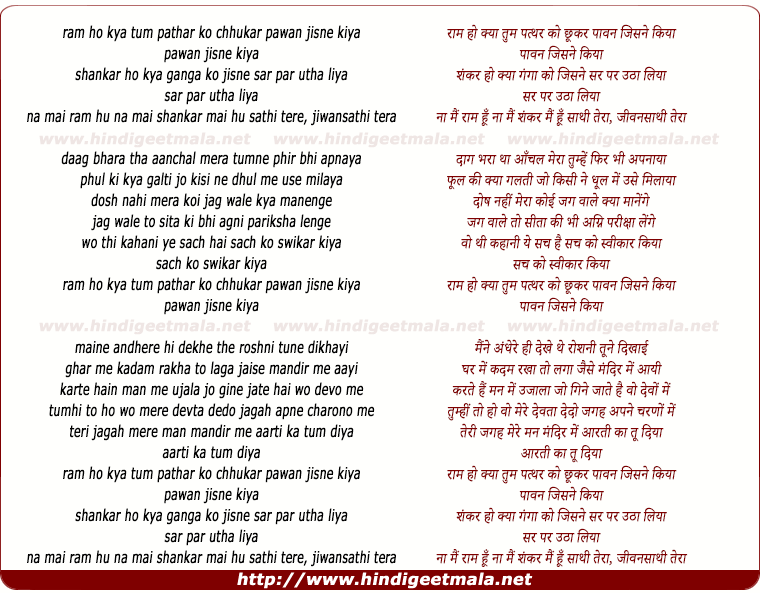 Comments on song "Ram Ho Kya Tum Patthar Ko Chukar Pavan Jisne Kiya"
yugpursh on Tuesday, July 06, 2010
There is no other Superstar than Rajesh Khanna and Amitabh Bachchan. Hey do nto compare All the Chinkoos (Khans), Minkoos (Ajay, Akshey etc.) and Pinkoos (The Rest) with them. Yes there are other great actors like Rishi Kapoor, Kamal Haasan, Mithun, Vinod Khanna, Jeetendra and Nana Patekar but not as the two greatest starts of the Hindi Cinema (Kaka and Big B).
The Big Three Pillars (Dalip - Raj Kapoor - Dev Anand) were the greatest, & so Ashok Kumar (in his time), similarly Shammi and Rajendra

anilksingh650 on Monday, April 18, 2011
beautiful, awesome every word has beautiful meaning, where is those era when we use to talk about god, respect for women, elders and children...
KASHMIR24 on Friday, November 27, 2009
i think the film your looking for is dil e nadaan with rajesh,jaya ,shatru and smita patil. the song is' chandni raat ko...
anilnarendran on Wednesday, July 14, 2010
so nice to see my dream woman JAYAPRADHA in this role. suits her so much.