Video of this song from youtube
Average Rating : 4.00
Total Vote(s) : 59
Please rate this song between 1 star and 5 stars (5 stars being the best). Just move your mouse on the stars above and click as per your rating. Your rating will really help us to improve our website. 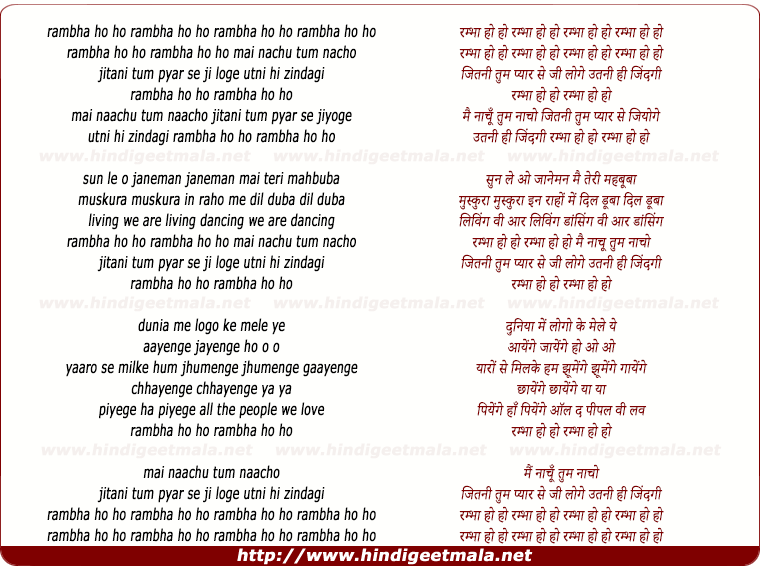 Comments on song "Rambha Ho Ho Main Naachu Tum Naacho"
sujaybhatta2009 on Thursday, February 05, 2015
Wow, what a deep MASCULINE voice ! The legendary Md. Rafi must had felt
ashamed and died prematurely. Another legend, Kishore Kumar also must had
felt unsecured and he too did not survive long.
With such rare talent Usha Uthup can fill in Kishore Da’s place, neither
for the quality of him nor to carry out his legacy, but just for matching
the sound wave’s frequency and amplitude. ﻿

BollywoodDutchy on Thursday, October 11, 2012
Although it's inspired on Que sera mi vida from the Gibson Brother from
Martinique and later France (which is not Hollywood!), this song rocks BIG
time. It is a very great composition!

BusyRiz on Saturday, September 15, 2012
You're right, how funny! That's rich coming from Bappida when all his songs
are copied from Hollywood. This one's a copy of 'Que sera mi vida'!!

SuperMUKULDEV on Friday, August 31, 2012
This song is A CLASSIC even Billoo used it in one his comic books . VEry
popular song of the eighties

Weet ik niet on Saturday, September 15, 2012
Bappi Lahri claims that this A. R. Rahmans Jay Ho is a copy of this
song...what a silly guy. LOL