Video of this song from youtube
Average Rating : 3.85
Total Vote(s) : 65
Please rate this song between 1 star and 5 stars (5 stars being the best). Just move your mouse on the stars above and click as per your rating. Your rating will really help us to improve our website. 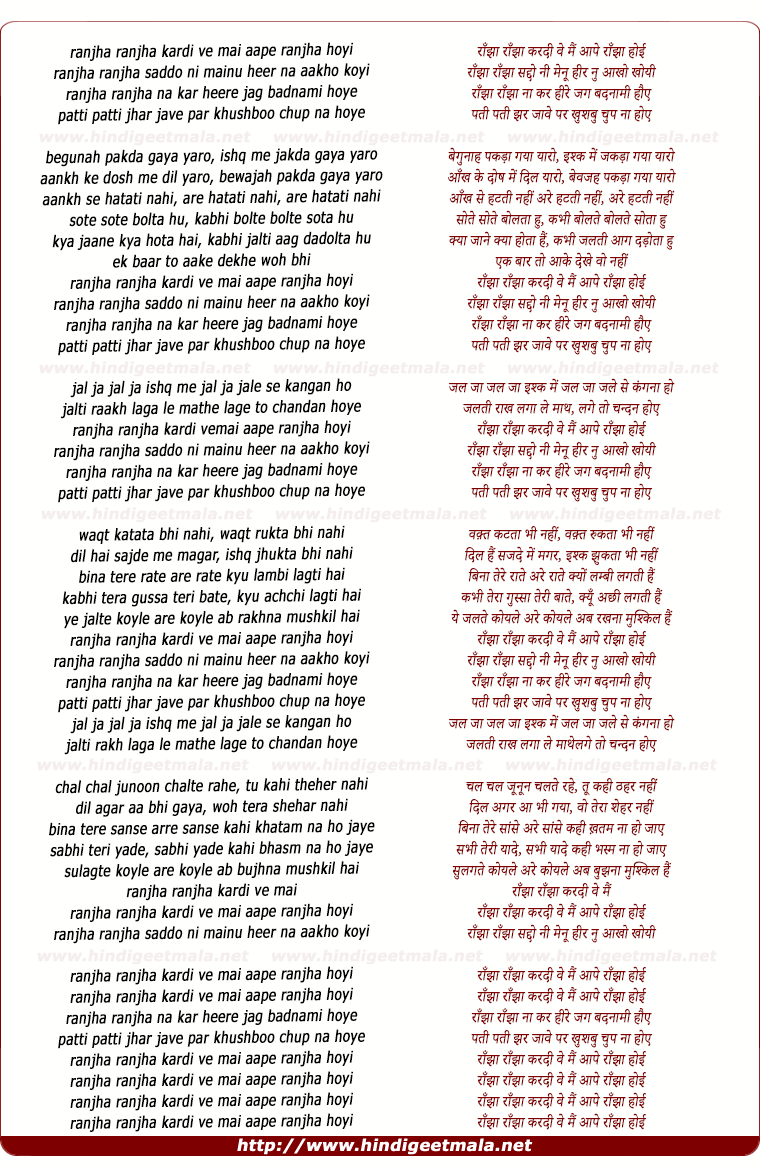 Comments on song "Ranjha Ranjha Kardi Ve Main Aape Ranjha Hoyi"
Mo00nlight on Friday, May 27, 2011
The first couplet is from the poetry of Sufi Saint Baba Bulleh Shah who
lived in 16th century. It portrays the final state of Heer in her ecstatic
love with Ranjha. Heer is depicting this condition by pronouncing Ranjha's
name again and again, i myself have become Ranjha. Please call me Ranjha
and no more call me Heer. I became exactly like﻿ him whom i loved. This is
the﻿ final stage of Heer's ecstatic love for her beloved.(a symbol of soul
returning to ultimate destination-close to God).

gueyization on Wednesday, October 19, 2011
She is Aishwarya Rai, miss world 1994 and a Bollywood mega star. She`s one of the best dancers in Bollywood , as well as one of the most beautiful woman in the world.You should check Crazy Kiya Re, Dola Re Dola, Nimbodda, Barso Re songs.her dance movements are so fluent and natural in there, she`s so awesome!
The guy is her husband and an awful dancer. I like this song and the clip, but it bothers me that the only thing they do is embracing non-stop, cuz the guy can`t dance or emote..lol

WhenIamSad on Thursday, April 21, 2011
Oo ranjha ranjha na kar heere jag badnami hoye Patti patti jhar jaave par
khushboo chup na hoye (o Heer, don't chant the name of ranjha because it
would lead to infamy in the world) (the petals of the flowers wither away,
but the fragrance doesn't become silent and is still there in withered
petals)

luvtogether on Sunday, August 01, 2010
Whats the instrument at 2:20min, I love da sound, so cool. Sounds like a
Peepani (Hindi word), the plastic or paper ones used in birth day parties
or the we use to make from tree leaves during childhood. Heard the similar
sound in one of the songs from "Oye Lucky! Lucky Oye"?