Video of this song from youtube
Average Rating : 4.17
Total Vote(s) : 12
Please rate this song between 1 star and 5 stars (5 stars being the best). Just move your mouse on the stars above and click as per your rating. Your rating will really help us to improve our website. 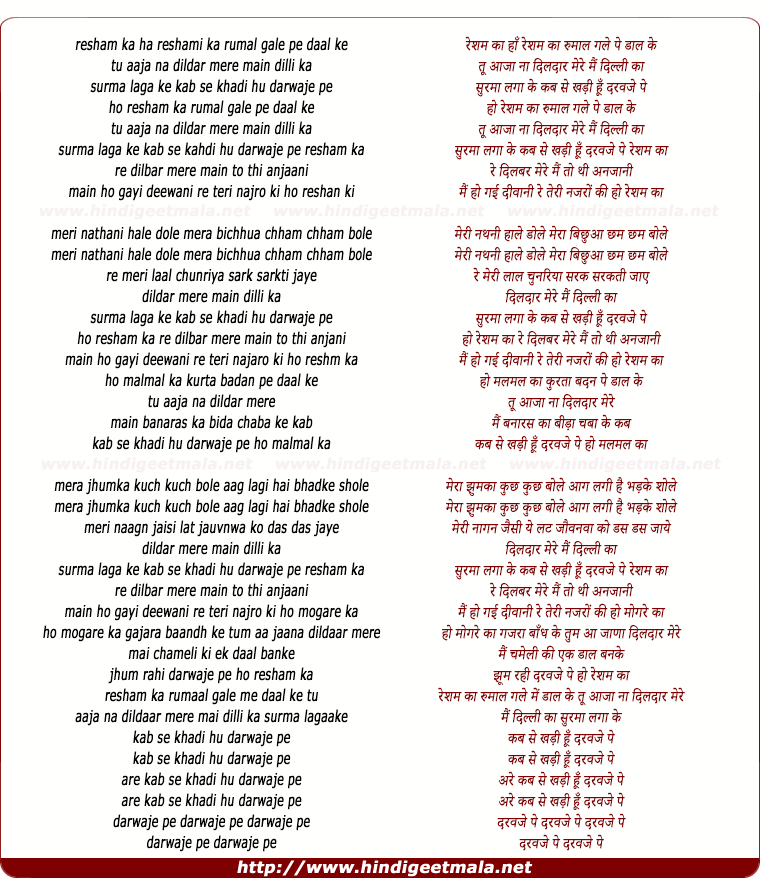 Comments on song "Resham Ka Roomal"
Rayan Khan on Monday, September 07, 2009
THANK YOU THANK YOU THANK YOU MANY TIMES OVER...I've been searching for
this song for like the last three years and here it is. I SOOOOOOOOOOOO
Love Rajasthani music and this is one of my fave songs of all times since I
first heard like 5 seconds of it in Lamhe.

liomixe on Monday, February 06, 2012
forever song, no need for intd. Ila Arun is not the creator of this song,
but she could be credited with popularising this song. All credit goes to
the great Indian Folk tradition, moreso the great tribes of Rajasthan for
their ingenuity, originality which is only possible when one is close to
nature, pure and simple. This applies to all Folk traditions of India, but
rajasthan is simply great.

Ambs z on Friday, August 12, 2011
i was in grade 9 wen i performed in india, in a cultural show of our
school! i miss india! and sicne den, i m listening to this song now! brings
back a lot of memories:)<3 illa arun is great:)

Sandip Baradiya on Tuesday, June 22, 2010
@immu1981 hey buddy same wid me..love this song serching from many
months but finally got it... 1 of the best rajasthani song
evr heard thanx a lot 4 video

HARSH MATHUR on Sunday, August 11, 2013
This song reminds me of my childhood...I used to dance on this song in
almost all the family functions & marriages...amazing song even the
other song 'chappan churi'