Video of this song from youtube
Average Rating : 4.16
Total Vote(s) : 258
Please rate this song between 1 star and 5 stars (5 stars being the best). Just move your mouse on the stars above and click as per your rating. Your rating will really help us to improve our website. 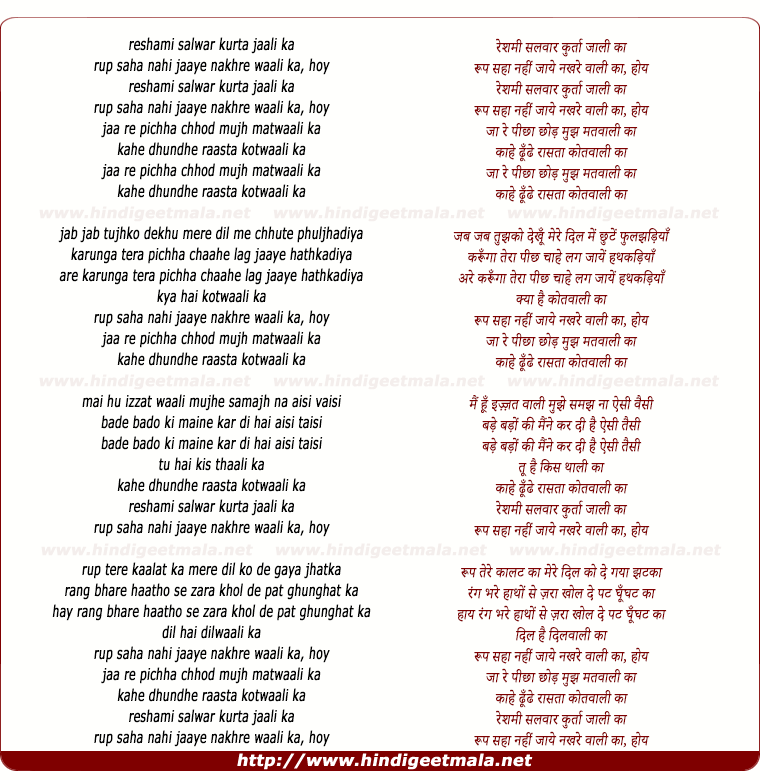 Comments on song "Reshami Salawaar Kudataa Jaali Kaa"
rumahale on Sunday, April 14, 2013
Absolutely. The Producer B R Chopra having pleased very much of the huge
success of the movie, remade colour version to commemorate the golden
jubilee year of its production (1957 - 2007).

kuckudk on Wednesday, February 03, 2010
The Dance is really enjoyable.
Thank you very much for sharing it with me.

vidhead85 on Thursday, November 20, 2014
Thank you so much for uploading this with English Subtitles. I love
listening to music in other languages, and it helps to know what they're
saying! :-)

I love the color and the playfulness of the dance number! Wish we had them
like this now, most dance numbers today aren't worth the paper they're
printed on lol﻿

Mohammad Husain on Sunday, December 22, 2013
I watched this song with incredible lyrics and music but still do not even
know till now, when and how the producers and directors of Indian Film
Industry will be able to find other artists who could perform their songs
with same melody.﻿

Mohammad Khan (Bajaury) on Friday, November 21, 2014
Vijayantimala may be a good dancer but here these two duo have stole the
show and hearts of many. Kum kum, so elegant and alluring. Minomumtaz
dashing. Great dance, great song and great music. Who puraney din nahee in
aaney ke.﻿