Average Rating : 4.27
Total Vote(s) : 99
Please rate this song between 1 star and 5 stars (5 stars being the best). Just move your mouse on the stars above and click as per your rating. Your rating will really help us to improve our website. 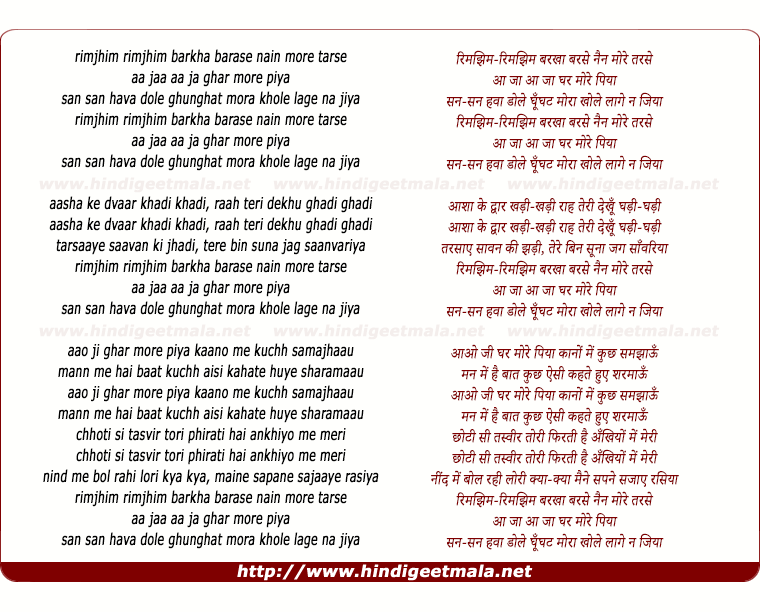 Comments on song "Rimjhim Rimjhim Barkha Barse Nain More Tarse"
ShivKumar44 on Friday, December 16, 2011
Originally this was from a Bengali Movie song "PASHER BARI" It also
Filmized in Hind version not like Bengali.The Name is PADOSAN. The first
line of the song:"JHIR JHIR JHIRI BARASHAY HAY KIGO BHAROSHA AMAR BHANGA
GHARE TUMI BINE." Music of Salil Chowdhury.I have this movie in VDO Tape
and print is not that bright.Non Bengali Members might face problem to
pronounce the words.Singer was Dhananjoy Bhttachrja. Actor in movie was
Sattya Banerjee.

Kamalakant Chitnis on Saturday, May 04, 2013
The starting tunes and total melody is the same as of Bimal Roy Film,
Pariwar and the song is "zir zir zir badarawaa barase ho kyaa re kyaa re"
sung by Lata Mangeshkar and Hemant Kumaar. Still the tunes of both the
songs are sweet,beautiful and absorbing.

Jagjit Singh Ishar on Saturday, March 29, 2014
Another feather in the feathered cap of Salil Chowdhary. I am paranoid how
such beautiful gems melodies were conceived, beyond imagination. Wish to
see the video of the song though it's not less than a miracle to have the
audio.﻿

nickkohri on Tuesday, July 21, 2009
Both "Tangewali" and "Parivar" have music by Salil Chowdhury. And the music tunes and orchestration also complement each other. If you did not know about it, you would think that all the songs are from the same one movie!
Rmehtacpa on Sunday, November 08, 2009
You are absolutley right about this two films tuned by Salil. Especially
this one and the one from Parivar Jhir Jhir Jhir Badrwa Barse... are
quite one like.