Average Rating : 4.76
Total Vote(s) : 29
Please rate this song between 1 star and 5 stars (5 stars being the best). Just move your mouse on the stars above and click as per your rating. Your rating will really help us to improve our website. 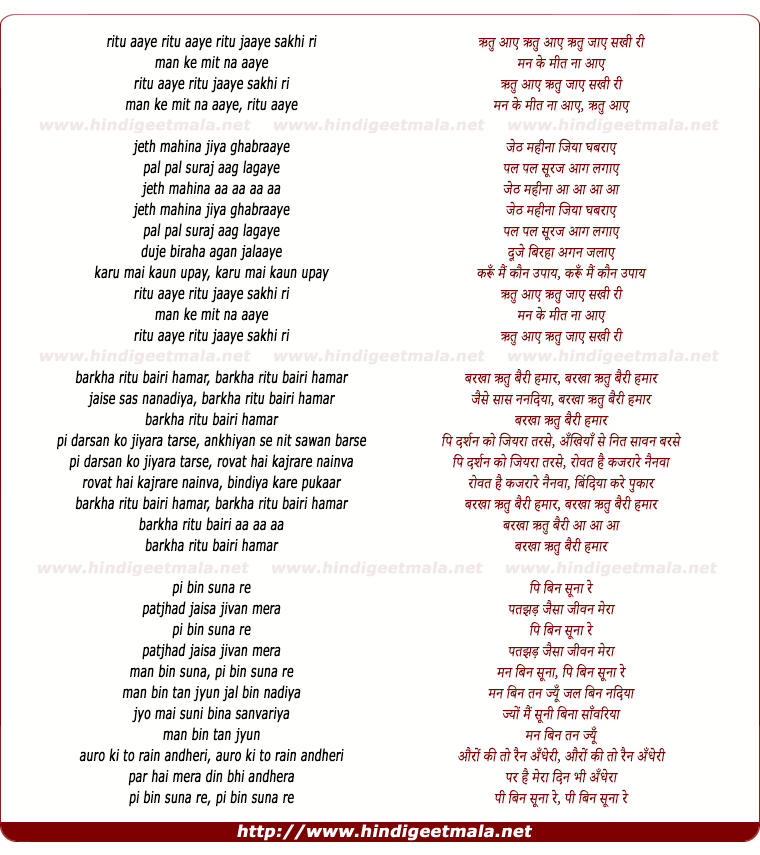 Comments on song "Ritu Aaye Ritu Jaye Sakhi Ri"
Psyche1954 on Friday, April 22, 2011
It is Gaud Saarang (an afternoon Raag) Mian Ki Malhar can be sung any time of the day in rainy season but is traditionally an evening raag and Gunkali which again is an early night raag!The lyrics are traditional and sung in madhyalaya,all 3 set to Teen taal (16 beats)! Taans sargam and Bol Baant are absolutely spot on! It is a privilage to be even able to understand enjoy such music! I thank my parents and Gurujan for the privilage!
Coucoutchicou on Friday, May 06, 2011
I'm afraid the last raag is NOT Gunkali, it is Jogiya - as announced by the composer himself on the 78 rpm record label. The pity is that the fourth raag - Bahar - which is most fantastically sung by Lata and Manna Dey - doesn't seem to appear in any clip...! The idea in the film was to show through the raags the 4 seasons of the year: Summer, Monsoon, Winter and Spring. Unfortunately nobody seems to have the last part...!
crazyoldsongs on Tuesday, June 15, 2010
exquisitely beautiful song ! the four verses are based on the four raagas pertaining to four seasons . this is just a divine rendition by the two legends . can you plz find the fourth verse and post . thanks a lot for this rare gem
BharatGul on Saturday, May 14, 2011
The song of course steals our hearts because of its beauty, but so does the adorable Nimmi, whose petite frame, innocent looks and sweet voice were always winners. The story goes that she did not let actor Errol Flynn kiss her hand in greeting her when she visited London in the early 1950s. That's how protective she was of her traditional personal modesty. Thanks, kalakar67.
Priya MyMusicalHeaven on Sunday, April 13, 2014
An eternal favorite ! One of the most beautiful semi-classical compositions
of Anil Biswas, composed in multiple raagas, and sung exquisitely by Lataji
and Manna Dey. Lovely lyrics by Prem Dhawan. Such semi-classical songs
about various seasons when rendered by singers such as LM and MD make me
feel like listening to them repeatedly. Thanks, MKji.﻿