Video of this song from youtube
Average Rating : 4.00
Total Vote(s) : 5
Please rate this song between 1 star and 5 stars (5 stars being the best). Just move your mouse on the stars above and click as per your rating. Your rating will really help us to improve our website. 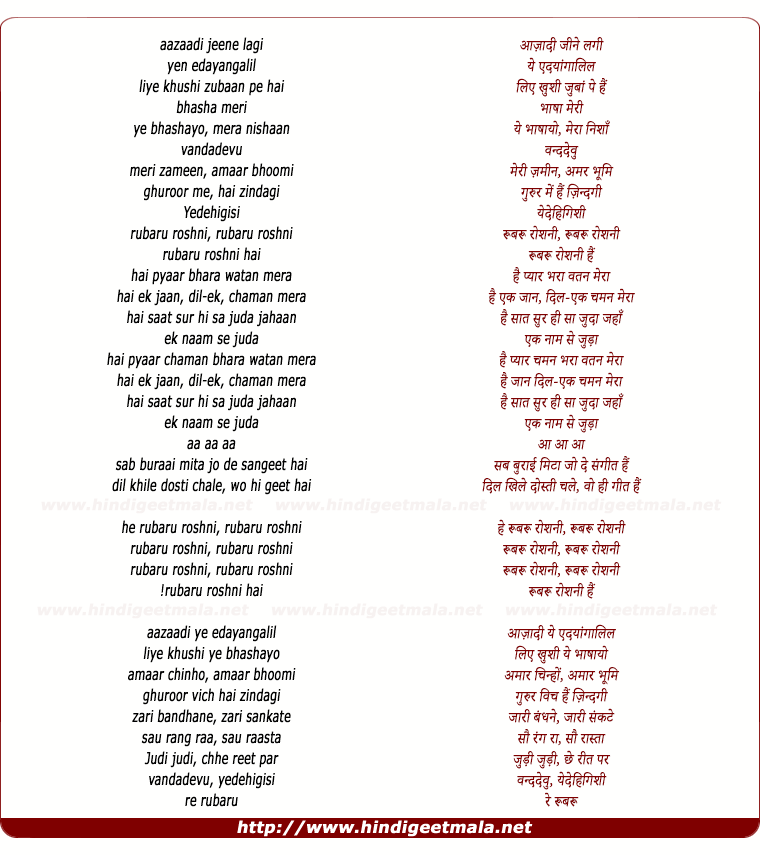 Comments on song "Roobaroo - Micromax Unite Anthem"
kshitij kapil on Wednesday, August 20, 2014
well guys this song is a nice gesture by micromax to mark the unity and
equality with diverse languages in the true spirit of independent india.
Non-inclusion of every regional language does not means that the song is
biased in any form towards any community or religion ,rather it cud just be
the lyrics tym constraintsBtw the song is awesome anyways(rand de
basanti-fame) so just enjoy it and appreciate the music .And above all this
is our country and we love it to the core of our heart.﻿

Sathya Sudhakar on Friday, August 15, 2014
If they were to include all the languages from India, then it will not be a
song. It would be a movie. They have chosen Tamil, Bengali, Hindi,
Rajasthani, Kannada, Punjabi just to show the four directions of
India.The letters showed in the song made up for the languages which did
not feature in the lyrics (It had Telugu, Kannada, Tamil, Bengali,
Gujrathi, Marathi, Hindi, Oriya).Kudos to the makers!!!!﻿

Guru Bhat on Friday, August 15, 2014
In India we always fight regarding languages, we pretend to like each
other, but we are fanatic about our mothertongue, this is a true fact and
this fanaticism makes us hate each other, but we always carry those
languages in our wallet...anyway, happy to see Raghu Dixit opening the
song, happy for Kannada, happy for all languages.moreover happy for
India...Jai Hind!﻿

Ahamed Nishadh on Wednesday, August 13, 2014
so this song and video basically says all people who speak english should
basically be sent out and only those who speak the local language can be in
india? WOW!! so much for unity eh?? ﻿

Kumarika Mohanty on Wednesday, August 13, 2014
Could have been better. None of words other than roobaroo are very clear.
Well no sign of Odia either. Otherwise its okay not very impressive as
described by scoopwhoop.﻿