Video of this song from youtube
Average Rating : 3.13
Total Vote(s) : 8
Please rate this song between 1 star and 5 stars (5 stars being the best). Just move your mouse on the stars above and click as per your rating. Your rating will really help us to improve our website. 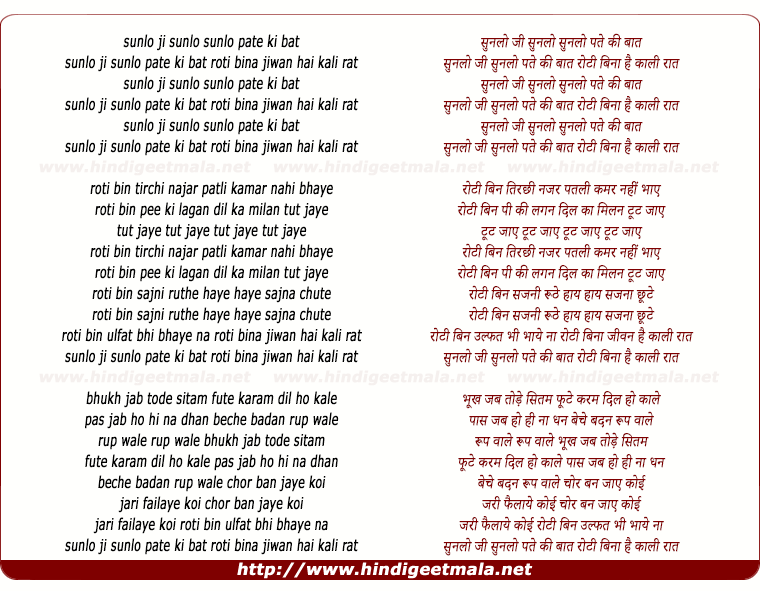 V. Siddhartha on Friday, November 26, 2010
The second one is a gem, indeed. I have known the song but thanks to you I am seeing the film clip for the first time. Thank you, kalakar67.
crazyoldsongs on Friday, November 26, 2010
thanks for introducing these two rare songs . the lata ji gem is a very rare sweet song .. thanks once again
1arshiakhan on Tuesday, November 30, 2010
Beautiful and mind blowing upload! Loved it. Roshan is one of my most favorite music director as he is totally versatile and that can be beautifully seen and heard in the second number. I really loved both the songs but second one is more beautiful. My personal favorite song of this film is the beautiful Rafi Saab and Geeta Ji duo called ''Ghirke Barse Yeh Ghatayen'' on sweet Johnny Walker and Minoo Mumtaz. Thanks dear for sharing beautiful rare gems. Greatly appreciated :)
TheDeepakp on Tuesday, April 21, 2015
Film cast: Balraj Sahni, Nirupa Roy, Kanhaiya Lal, Nazir Hasain, Mehmood
Singer: Lata Mangeshkar, Mohammed Rafi, Geeta Dutt, Suman Kalyanpur
Lyricist: Khumar Barabankwi
Music Director: Roshan
Film Director: Ismail Memon﻿