Video of this song from youtube
Average Rating : 4.35
Total Vote(s) : 31
Please rate this song between 1 star and 5 stars (5 stars being the best). Just move your mouse on the stars above and click as per your rating. Your rating will really help us to improve our website. 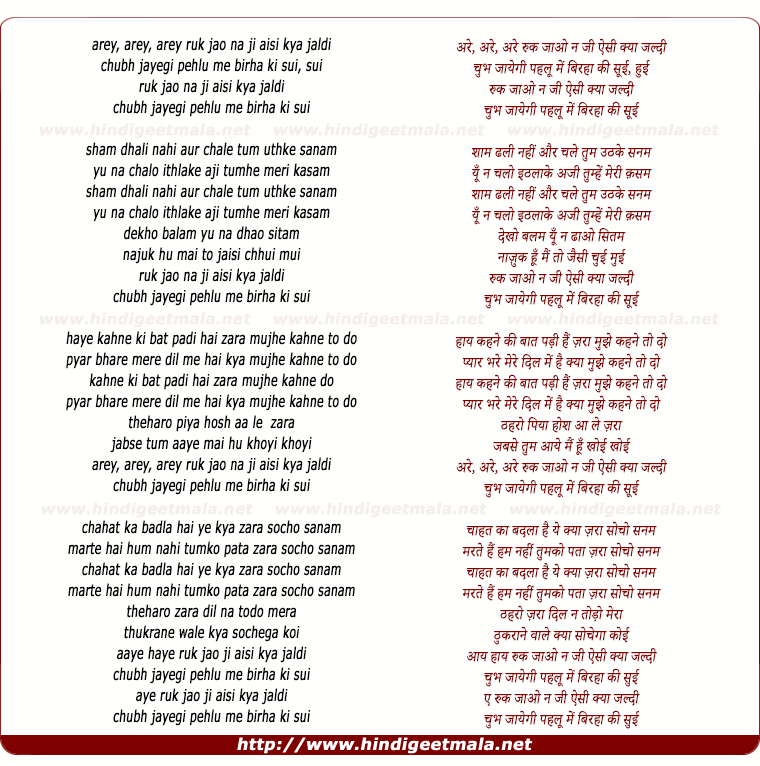 Comments on song "Ruk Jao Na Ji Aisi Kya Jaldi"
RosyPandya on Tuesday, August 19, 2008
Actually, this song IS from Chalti Ka Naam Gadi. Madhubala (Renu in the
movie) is trying to stall that guy (one of the villains) by singing the
song. She is waiting for Kishore Kumar to arrive so that they can follow
that guy to his hideout. LOVE the song, by the by.

durlabh kolhe on Monday, October 12, 2009
seen in the song are madhubala and sajjan[villain]. madhubala was great
there is no other comparision to her in bollywood.

Nalini on Saturday, July 07, 2012
I saw Madhubala and folks in real life one could not take the eyes off of
her face. You would be bewildered, awestruck, moon struck you will be so
transfixed and would not even breathe and the only words out of your mouth
will be "you're so beautiful, as if you've come from chandra loke (from
moon) " , She had very light skin, was white as the moonlight and without
make up she looked gorgeous, there will be no other actress so beautiful
ever . She came from moon. Truly a drop dead beauty.

Atiq Rahman on Sunday, October 30, 2011
@TheFaaruq Oh ,yes--MADHUBALA. Since I have seen MADHUBALA , seems like
beauty starts and ends with MADHUBALA. But -----MADHUBALA is a dcade before
my times--is this is just screen beauty?. I posed this question--Was
MADHUBALA in actual life really that cute--or it is just screen beauty?
Some one replied--" Believe me---I have seen MADHUBALA in real life. She
was more beautiful & stunning than what she looks on the silver screen! "

TheFaaruq on Saturday, July 10, 2010
Beside this song I would like to comment upon Madhubala. Madhubala was the most beautiful woman of the world, I do not think that beauty like her would come again to this world.
View all 15 comments related to song Ruk Jao Na Ji Aisi Kya Jaldi
Popular Links on HindiGeetMala