Video of this song from youtube
Average Rating : 3.35
Total Vote(s) : 20
Please rate this song between 1 star and 5 stars (5 stars being the best). Just move your mouse on the stars above and click as per your rating. Your rating will really help us to improve our website. 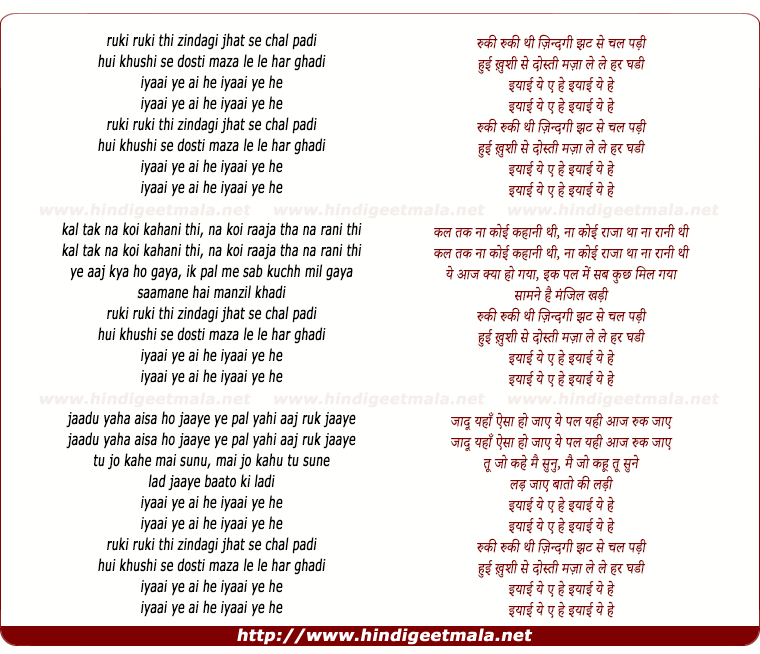 Comments on song "Ruki Ruki Thi Zindagi Jhat Se Chal Padi"
khanshameela on Sunday, August 01, 2010
this movie brings soooooo many fond and wonderful memories. back in 2002,
aftab became a huge inspiration for me. he was and is a role model for me.
he is the only actor that has the sweetest smile and a golden heart. God
bless him. He will have great success.

arunsridaran on Thursday, April 12, 2012
wikipedia is edited by people like u and me...dont trust it.i saw sunidhi chauhan and her mother give a live interview in Doordarshan, when this movie released years ago, and she was 13 that time.
MrAndroidTNW on Sunday, August 09, 2015
SHE WAS 16 YEARS, 2 MONTHS AND 1 DAY OLD WHEN THIS MOVIE WAS RELEASED!

AKASH SINGH on Thursday, August 13, 2009
she was 13 when she sung this song...she said it by herself in an
interview..check on wiki.