Video of this song from youtube
Average Rating : 3.67
Total Vote(s) : 27
Please rate this song between 1 star and 5 stars (5 stars being the best). Just move your mouse on the stars above and click as per your rating. Your rating will really help us to improve our website. 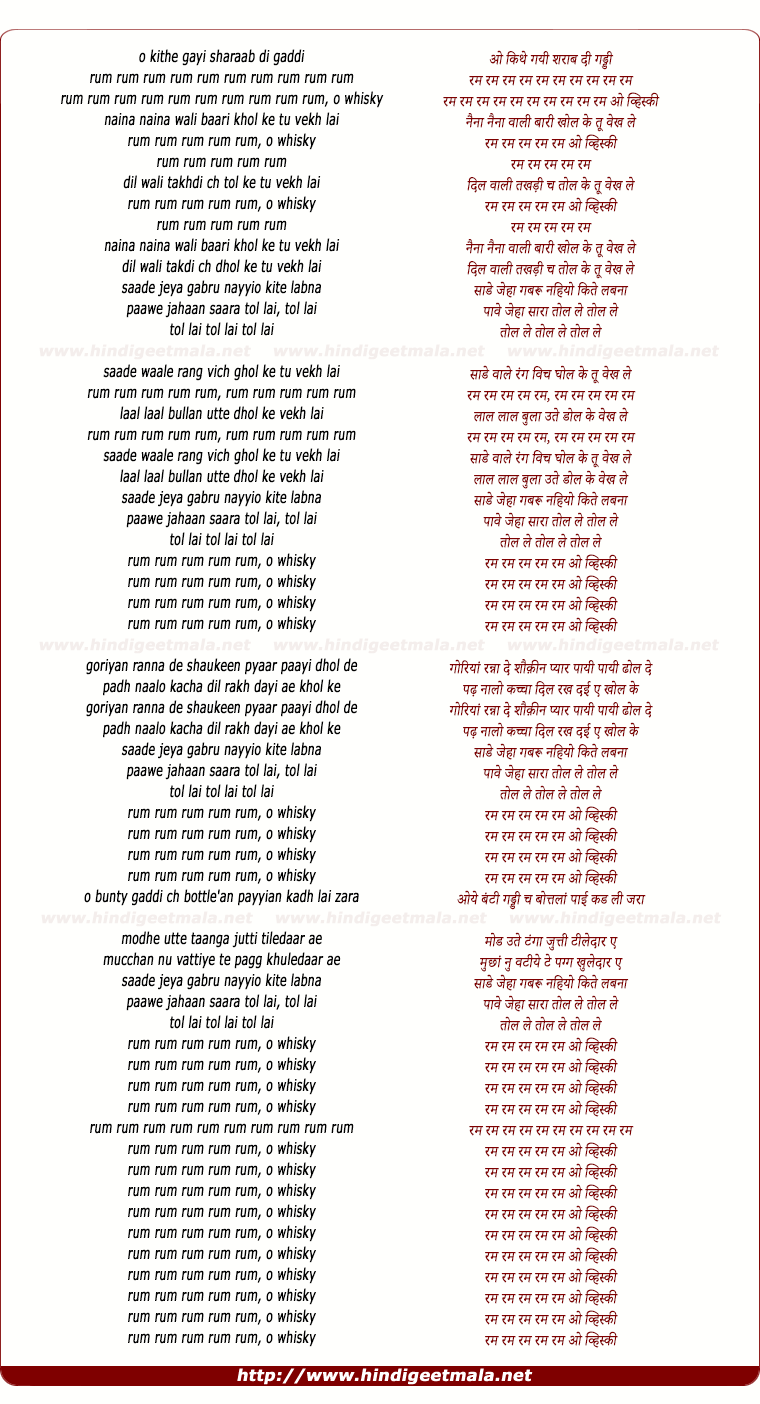 Comments on song "Rum Rum Whisky"
Manny Mahil on Wednesday, July 04, 2012
Its funny how people think this is Punjabi music. This isn't Punjabi music.
This is Hin-jabi. LOL. It's funny how bollywood thinks if they jam a tumbi
or algoze into any song its "Punjabi". Try searching music from Sukhshinder
Shinda, Tru-skool and try searching voices and lyrics of Kuldip Manak and
Gurdas Mann. Then you'll see "Punjabi" music in action

K Mamgain on Thursday, May 31, 2012
In an industry that solely focuses on box-minded formulaic movies, this
movie really brings some creativity to the table. Can't agree more, that
Abraham deserves so much credit for just putting his faith in the concept.
The fact that it was received well commercially shows that after all,
Indian populace also wants some fresh air. Kudos to John.

avalanche16 on Wednesday, June 13, 2012
punjabi is more influenced from sanskrit than urdu.you are missing the
key point here...sanskrit is a mother language...even urdu is influenced
from it...in the subcontinent area sanskrit reigns supreme at the top
branch and languages like hindi punjabi bengali urdu etc have been
influenced by it

avalanche16 on Thursday, May 10, 2012
John Abraham is getting lame now. Its like dude we know you have a good
body. But he shows it off every movie and every song in the same way over
and over again. Its not going to make up for your lack of acting, dancing,
and personality dude so I suggest you focus on those things.

Suraj Suba on Sunday, July 15, 2012
Punjab Isn't great, Gujarat Isn't great, Bengal isn't great... What is
great is India. And not just India, a Unified India. This is coming from a
Indo-Canadian, who finally fell in love with India after 3 trips.