Video of this song from youtube
Average Rating : 4.49
Total Vote(s) : 131
Please rate this song between 1 star and 5 stars (5 stars being the best). Just move your mouse on the stars above and click as per your rating. Your rating will really help us to improve our website. 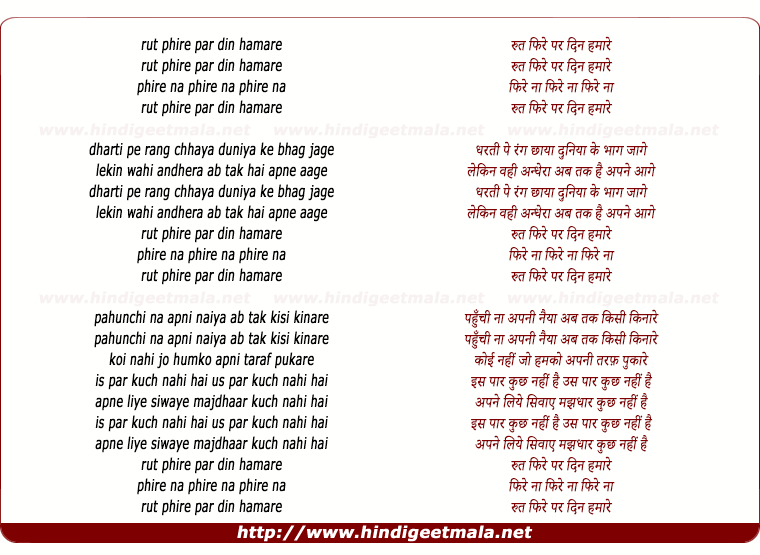 Comments on song "Rut Phire Par Din Hamare"
Surender Bhutani on Sunday, August 18, 2013
Guru Dutt used to overshoot his films and then he had to make adjustments.
Not only this song was removed,in his flim CID "Jata kahan hai diwane" was
also removed. Similarly he had recorded Hemant's one song in Saheb, Biwi
aur Ghulam which was not included. Later on Hemant used the tune and
composed "Ya dil ki suno dunia walo." But this song is a master piece.
Sahir wrote it very well to Dada Burman's tune. Dada usually used to make
tune first. Dr Surender Bhutani Warsaw (Poland)

nandu1f on Wednesday, January 25, 2012
Sachin Da was the most consistently and amazingly creative genius of Hindi
film music for 30 years. Geeta Dutt had a different kind of sweet voice and
style that made her uniquely different than Lata and Asha; all three
masters in their own craft. Great find this song rc ji. Never heard it
before.

shekarman on Thursday, June 03, 2010
is this song really in the movie Pyaasa -- if so I must have seen edited
version of the movie. Anyway, thanks for the upload.

nareshkhattar on Monday, August 11, 2008
Wow, what a song! Thanks a million rc0972 for posting :) I like everything
here - tuning/ singing/ lyrics; simply amazing! Sad that it was not a part
of audio release of the movie. incidentally, does this song have a Bengali
'papa' ?

akdutt2008 on Wednesday, February 01, 2012
Since Pyasa was released in 1957,I* am at a loss to understand as what prompted Guru dutt to omit this unique and everlasting song from the movie..Such a verstile singer perhaps may not come again.
View all 7 comments related to song Rut Phire Par Din Hamare
Popular Links on HindiGeetMala