Video of this song from youtube
Average Rating : 3.97
Total Vote(s) : 242
Please rate this song between 1 star and 5 stars (5 stars being the best). Just move your mouse on the stars above and click as per your rating. Your rating will really help us to improve our website. 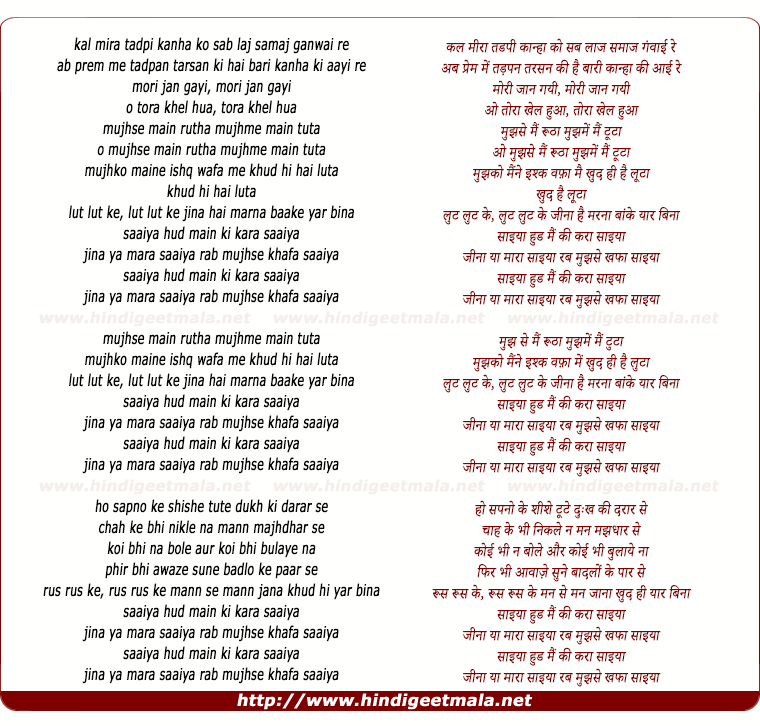 Comments on song "Saaiya, Rab Mujhse Khafa Saaiya"
Ladki2407 on Thursday, April 17, 2014
These new bollywood movies present too much violence...fight...guns... I
know it is the image of nowadays India, but there is no more delicacy and
pure love when it's shown so much violence. This is my opinion.﻿

Manoj Sharma on Sunday, February 16, 2014
I was crying when I saw this song in movie..Arjun is going to next Ajay
devgn of this industry.what a emotional song.bumper hit movie n super
song and class act by Arjun n Priyanka...u guys rocksssss﻿

Bruno'sBaBySquirrel on Thursday, January 23, 2014
I love this song. The three best songs in the film are Saaiyaan, Tune Maari
Entriyaan and Jiya. They are simply beautiful. But this one just, I don't
know. Love the clip too. Arjun has done a great job.﻿

Atefe Ebrahimi on Thursday, January 23, 2014
Loved the song! wanna watch this movie! hope it has an interesting plot!
seems like Ranveer is gonna sacrifice himself! plz don't die at the end :)﻿

Sakina Sehgal on Thursday, January 30, 2014
All the songs from this movie so far have actually been really good.
Pleasantly surprised because I was expecting nothing. ﻿