Average Rating : 4.22
Total Vote(s) : 386
Please rate this song between 1 star and 5 stars (5 stars being the best). Just move your mouse on the stars above and click as per your rating. Your rating will really help us to improve our website. 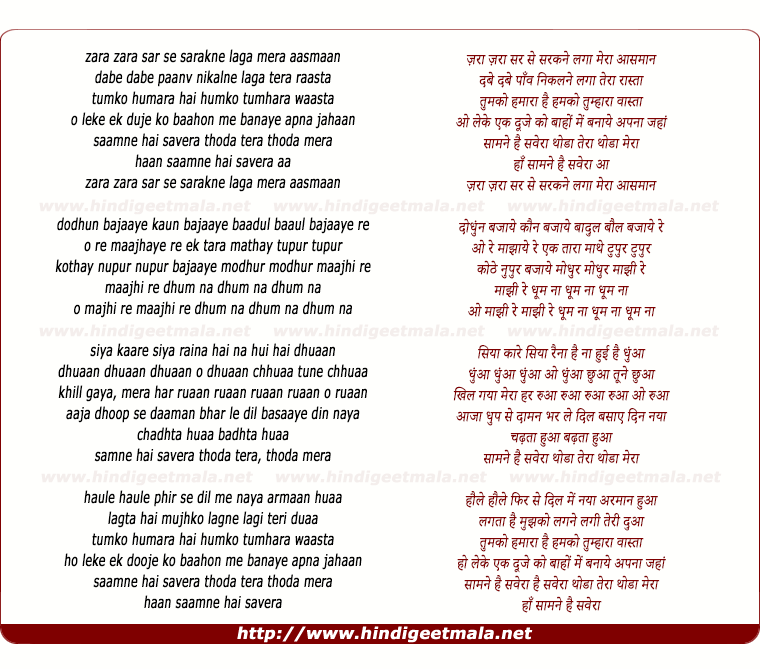 Comments on song "Samne Hai Saveraa Zara Zara Sar Se"
lifestyle08 on Thursday, October 31, 2013
first of all i am not your bro we dont share any relationship neither are
we brother and sister neither are we husband and wife so plz dont say me
that again and yea speaking of katrina kaif she is considered the most
preetiest actress ever to grace indian cinema only rekha and madhubala are
at par with her while kareena has a charming personality yea sure if i
become a director or producer i will cast you ROFL

lifestyle08 on Wednesday, October 30, 2013
sonkahi sinha looks like a 40 year old aunty who is in bollywood because of
actors like salman khan and her father who is a bjp politician and a former
actor heck even you are more gorgeous then sonakshi and there are thousands
of girls out there who deserve a spot where she is currently but because of
lack of contacts those girls are left behind this is why India will never
progress

shahin yusuf on Friday, October 25, 2013
Sonakshi's forehead is shining which is a good sign. Saif, ur dressing best
at it, but what hapen to this film? Choreography is simple, dint mak any
story, D.o.p is mediocre, Music has same rhythm towards d end..
Cm'on..shreya stole the heart, if Sajid replace with Rahat, this song goes
to another level. Music beats sud upgrade some nodes..

AMIT TYAGI on Wednesday, September 23, 2015
this is life song of mine now , sonakshi sinha the picturization is just
perfect u and every were , small medium hairs r easy to maintain. rick shaw
pulling i will definitely be there to see you happy with my self and u got
to be sitting in the rickshaw which i pull for your own personal use only.﻿

gakkadguy on Monday, November 25, 2013
Nice song. Sonakshi looks pretty, and Saif pairs well with her.
Shreya always the best.
But Wajid you are good, some how you sound like kumar sanu﻿