Video of this song from youtube
Average Rating : 4.47
Total Vote(s) : 397
Please rate this song between 1 star and 5 stars (5 stars being the best). Just move your mouse on the stars above and click as per your rating. Your rating will really help us to improve our website. 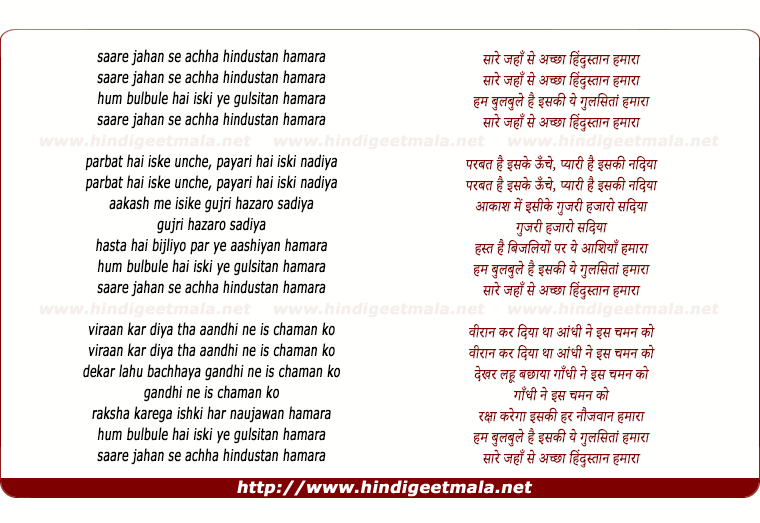 Comments on song "Saare Jaha Se Achha Hindustan Hamara"
ShivKumar44 on Friday, December 30, 2011
To all MembersYou Tube:I have the movie Bhai Bahen and audio Tape HMV RPG
Patriotic Songs.Bhai Bahen1969 was written by Raja Mehdi Ali Khan and
Music:N.Dutta.I taped the song from Vividh Bharti in1982. I clearly
remember the announcer said"Kalam Allama Iqbal Ka Hai." That song was sung
by Mohd Rafi Asha Bhonsley and chorus."MAJHAB NEHI SIKHATA APASMEIN BAIR
RAKHNA" this Para is not present in movie. School Student used to
sing.There is a scene in the movie Nayee Delhi.Original Poem by IQBAL.

nandu1f on Saturday, November 22, 2008
Masterpiece, Hemanthji. Brings tears to my eyes. I don't know exactly why.
May be a combination of the beauty of the song and the lofty ideas
expressed, and thinking about our innocence lost from those times, and the
nation's unfulfilled dreams. Don't really want to allude to the low nadir
reached by the politicians since then - not on this site.

ShivKumar44 on Friday, December 30, 2011
Continuation:Father of Talat Mahmood was also a singer. In Lucknow he sung
this song in presence of Allama Iqbal in a variety show. Simply it is not
understood why RMAKhan wrote this song in different way.

Jagjit Singh Ishar on Saturday, July 12, 2014
Saw this movie during my school days. Still it's fresh in my soul & mind
with bful melodious songs.﻿