Video of this song from youtube
Average Rating : 4.54
Total Vote(s) : 391
Please rate this song between 1 star and 5 stars (5 stars being the best). Just move your mouse on the stars above and click as per your rating. Your rating will really help us to improve our website. 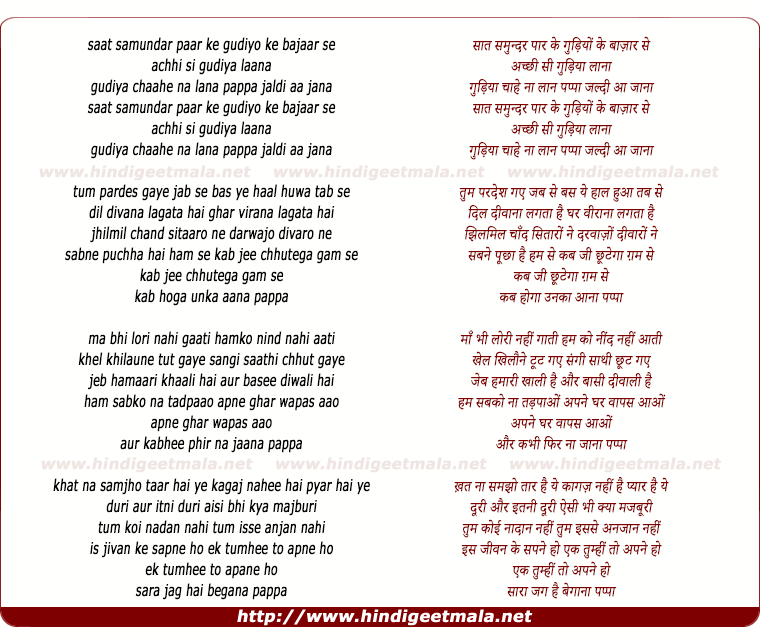 Comments on song "Saat Samundar Paar Ke Gudiyo Ke Bajaar Se"
8855arun on Thursday, July 21, 2011
this songs touch my heart.i love to much this song.as being father i never left my doughter.
Peshawar2010 on Tuesday, August 18, 2009
I do believe that the singer is Sulakshna Pandat, as its too old song and that time this singer just a girl, not younger but was in between 10- 12 years old,As for as this song is concerned one of the best to present the feelings and sentiments of kids who are missing their father,and mom is also missing his husband. and last words of lyric that,,,Gurya chaey na lana, papa jaldi aa jana..look at the expressions of little girl.
thanx rajshi, after 30 years listened

Deepali Shrivastava on Saturday, May 29, 2010
i love this song very much bcoz in my childhood i m singing this song 4 my
father, he loves me so much . in present he is no more n i m dedicated this
song 4 my father.plzzzzzzz dad come soon... yours deepali
(pari)

meenmk on Monday, November 17, 2008
hi friends you know why i like this song when i start speaking i listen
this this song on radio in 1982. my dad is on training outside the
hometown, when he come back then i sung this song to papa. u say this is my
first song

durlabh kolhe on Friday, November 13, 2009
this song is from rajashree films taqdeer and this film was released at
about 1971-72. bharat bhushan and shalini were the dad and mom. and i think
this was farida jala's first film. music scored by laxmikant pyarelal.