Average Rating : 4.13
Total Vote(s) : 328
Please rate this song between 1 star and 5 stars (5 stars being the best). Just move your mouse on the stars above and click as per your rating. Your rating will really help us to improve our website. 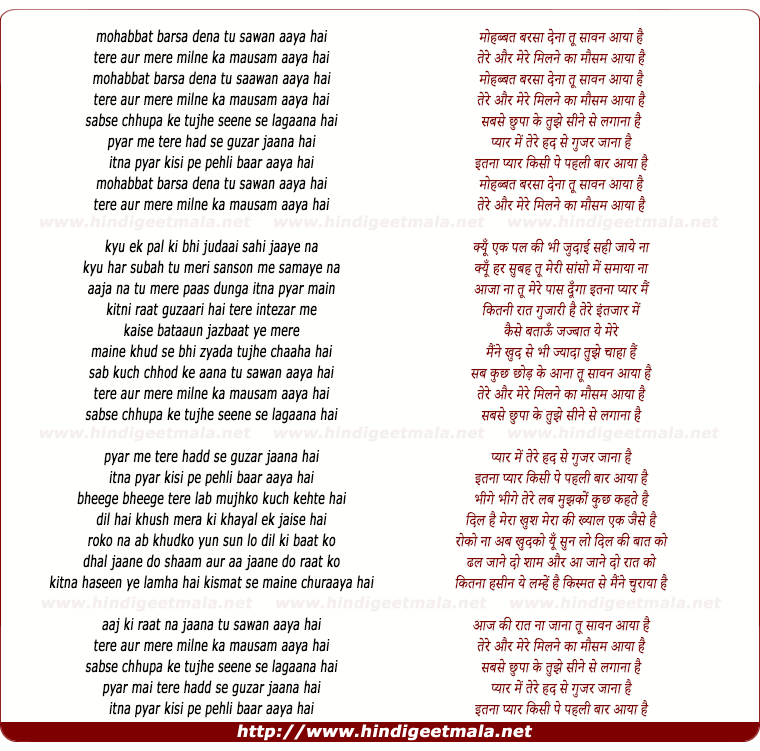 Comments on song "Saawan Aaya Hai"
Robin Singh on Monday, August 18, 2014
Thank
You T-Series for such lovely songs.I love this song too much...I can't
stop myself listening to it again and again.Well,I also want to become a
singer and want to work with T-Series.I recorded this song in
Karoke.T-Series please give me a chance to become a singer.I live in
US,I want to come to Mumbai..I also recorded Aahatein song from Ekk Main
Aur Ekk tu by Amit trivedi.Thank you again T-Series all team for such
melodious voices and songs ﻿

adaa sharma on Sunday, August 17, 2014
That chaata dance.. That was ridiculous. I couldn't stop laughing. Why they
hire such kinda choreographers?? And who's that ugly faced actor? Help him
get some expressions on his face. Isse acchi acting to hamari bipasha kar
leti hai. Its songs remind me of haunted and 1920 returns﻿

Ibrahim Shafin on Saturday, August 02, 2014
The lyric and tune reminds me of the melodious era of Bollywood when I was
a kid and was constantly amazed by Udit Narayan & Kumar Sanu.

Couldn't imagine #ArijitSingh could give us sth soo good! In spite of such
a new feeling, it has such a golden touch.WOW.﻿

Abdul Rahman on Monday, August 17, 2015
There was no way I could get the job, but it would have a great deal with.
This was the best. The company has told us to be honest. This will help me.
The best part is the most important part.﻿

Sid Mehta on Wednesday, July 30, 2014
Music by tony kakkar . he is the one who made shahrukh khan song ,botal
khol and khafa mahiya . his songs r magical .

Savaan aya hai is making me fall in love with monsoon . ﻿