Video of this song from youtube
Average Rating : 4.00
Total Vote(s) : 11
Please rate this song between 1 star and 5 stars (5 stars being the best). Just move your mouse on the stars above and click as per your rating. Your rating will really help us to improve our website. 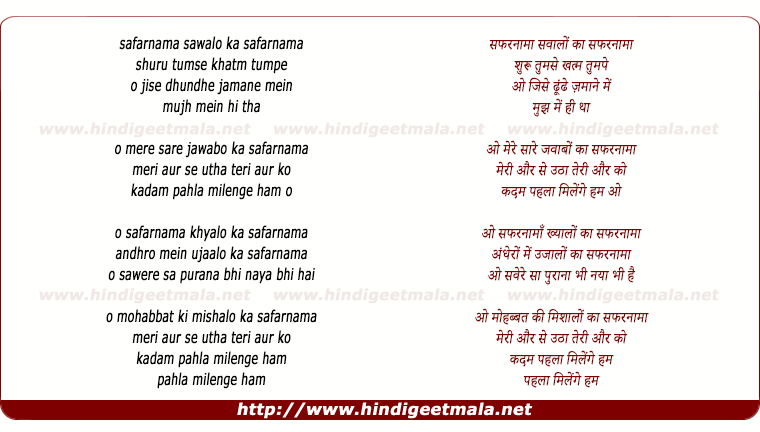 Comments on song "Safarnama Khayalon Ka"
MR on Monday, October 19, 2015
With tamasha album it feels like 90's pop culture back. (New music .. fresh
tune, experimentation , resistance and then appreciation ) That was the
time when amazing artist such sonu nigam (dewaana) lucky ali, shaan , mohit
chouhan(silk route), aryans, euphoria and many others were creating amazing
fresh tunes .. Right were are trapped in recycle mode.All fast songs (
exceptions are always there)are exactly with same dhanchak beginning, catch
tune with mandatory rap in between .. Even all melodious songs are same ..
we like them because music our mind are accustomed to them heared them
before and thus relate to it. We may like or not like this album but we
should appreciate the zeal and enthusiasm of makers of trying something
new.﻿

Vikas Krishnan on Saturday, October 24, 2015
This song is something I would like to listen while travelling. Lucky ali I
have been your fan since 18 years. Back those days only V channel n M tv
have been the source to listen songs of yours. And what do I say about ARR
Sir . Genius or Legendary. May b both . Down to earth, humble . Vaazhga!﻿

maharshi jani on Monday, October 19, 2015
wonderful song but still I am now fed up of AR rehman,no freshness at
all,he needs to do something new except of his Rang de basanti there are so
much similarities in all his albums and fed up of it,amit trivedi and
Shankar ehsan loy evolve their music every album he is same as when he
entered﻿