Average Rating : 3.50
Total Vote(s) : 6
Please rate this song between 1 star and 5 stars (5 stars being the best). Just move your mouse on the stars above and click as per your rating. Your rating will really help us to improve our website. 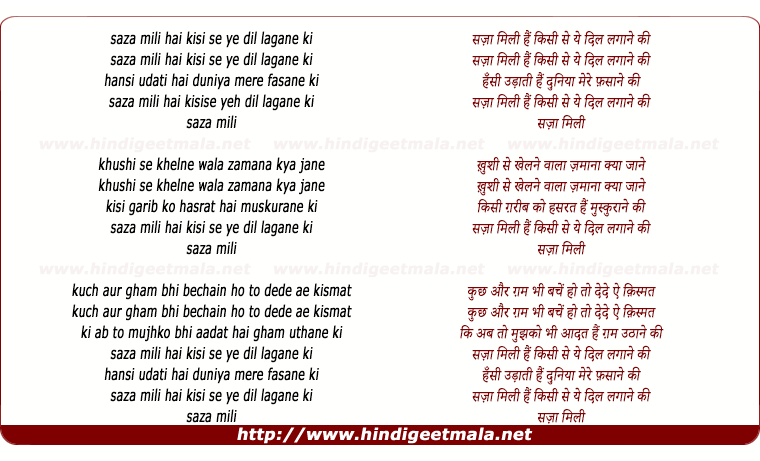 Comments on song "Saja Milee Hai Kisi Se Yeh Dil Lagane Kee"
Moid Hasan on Tuesday, July 26, 2011
Thanks,uploader,Rehma,you have come up with the song from Kamal Ke phool
1950,much sought after one gem,Cast; Suraiya, Amarnath(Danka 54,Johri
51,Andhernagri Chaupatraja 55,and many others) Raj Mehra and Jevan,produced
by Famous Pics,composed by Shyam Sunder,,Directed by D.D.Kayshup who
introduced Husnlal Baghatram and Begum Para in Chand 1944,This movie has
four more very good songs ,specially Koi dil mein samaya chupke Chupke
,Reham this one of the finest presentation deserving all kudos.

Moid Hasan on Tuesday, July 26, 2011
All songs of Kamal Ke Phool were penned by Rajender Krishan.Dev anand was
supposed to join as a hero against suraiya in this film ,but dev Anand's
preoccupation to complete his own production Afsar 1950,did not allow him
to steal time to work in Kamal Ke phool,and Suraiya was not happy with this
refusal.The director had to cast Amarnath finally.the film was a big hit
without Dev Anand,due to presence of Suraiya and her superb rendition
,thanks Rehma for bringing all this into memory.

jasbongy on Tuesday, July 26, 2011
Very sad ,touching song with soulful lyrics. Suraiya Ji's melodious
rendition with feelings of dard & hepllessness touch the heart of
listener.& listener can feel that pain.Her picture is very very appropriate
to this emotional song. Thanks Dear Rehma Ji for as usual spreading joy
with your never heard songs/uploads.Thumbs Up. With Blessings & Love. Didi.

Vidur Sury on Tuesday, July 26, 2011
Thanks for sharing the very melodious Suraiya Ji song, one of my most
favourites. All songs in this film (by Suraiya Ji, Shamshad Ji and Talat
Ji) were excellently sung and composed by the great Shyam Sundar Ji. Great
job of presenting the immortal song. Best wishes for your uploads to thrive
and you to get all your requested songs.