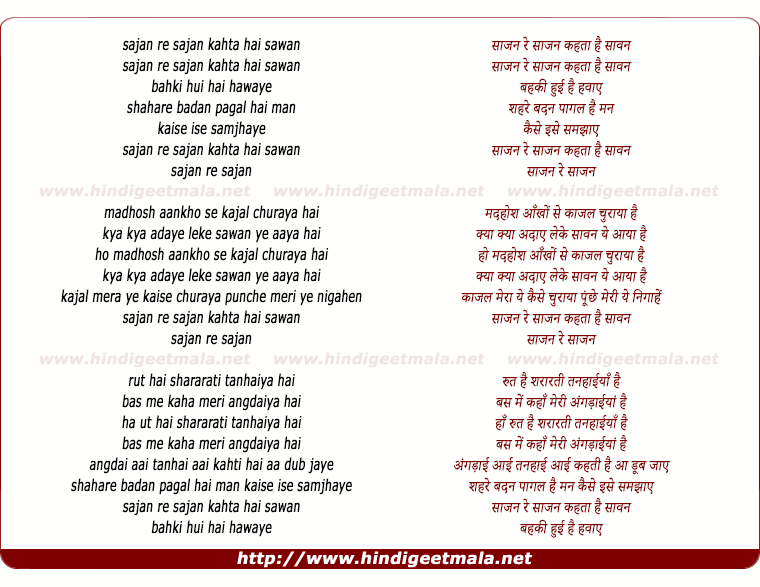 Comments on song "Sajan Re Sajan Kehta Hai Sawan Behki Hui Hai Hawaye"
surajsunsuraj on Monday, September 27, 2010
yesterday i had to go for a meeting, but i was so much engrossed in kk
beauty that i missed my meetin because i was late to office by 1 hour. I
just could not move away from system . at the back of my mind i knew i had
to go for meeting, but i was mesmerised by her beauty. it is difficult for
a man to resist the charms of a women if she is as hot as kk in this song.

surajsunsuraj on Wednesday, September 16, 2009
the scene where govinda rubs his fingers against karishma lips and then the
expression that karishma gives and then govinda moving his hand on karishma
navel and hips is very arousing.

surajsunsuraj on Wednesday, September 16, 2009
karishma is beautiful women. i was so attracted by watching this song I was
not able to resist my temptation in nights i used to dream of karishma and
...

chandjas on Thursday, February 18, 2010
i think govinda is very romantic as well i think no female has commented on
this, but i think he has done a wonderful job as well

surajsunsuraj on Wednesday, September 16, 2009
no male will be able to resist if a women is seductive like karishma kapoor
in this song. I only dream of ... karishma.