Video of this song from youtube
Average Rating : 4.24
Total Vote(s) : 62
Please rate this song between 1 star and 5 stars (5 stars being the best). Just move your mouse on the stars above and click as per your rating. Your rating will really help us to improve our website. 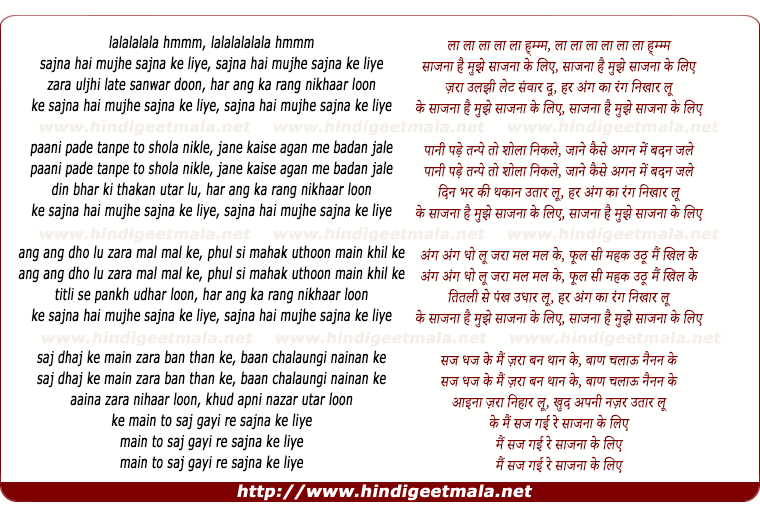 Comments on song "Sajna Hai Mujhe Sajna Ke Liye"
Moti Lalwani on Wednesday, September 08, 2010
@samalini The girl is in a happy mood, waiting for her lover to come whom
she has just married. The fire you see is symbolic that she is on fire.
Besides, her husband, the famous actor Amitabh Bachchan, is a jaggery
seller, which she is supposed to make by heating the juice of the tree
which he had brought. This is the scene in short but if u want the full
meaning of the song, I will have to listen and translate.

SIRATJI on Wednesday, April 22, 2009
at the end of the song..amitabh beats her up as she burns all the
fluid(think its some juice for making sugar) that amit has so painfully
collected, and he has left his wife Nutan for Padma Khanna...it was a good
movie...only for intellegent ppl, though...no dhoom tadam silly stuff and
people wake up, this is what india was like in the 50s. People were poor
and they even washed their bodies with ash or mud..

azzy314159 on Saturday, January 15, 2011
This song raises goose bumps all over my skin. There are few songs more
touching. BEATIFUL Titlee say pankh udhaar loon. Har ung ka rang nikhaar
loon. keh sana hai mujhay sajna kay liyay Aaina zara nihaar loon. Khud
apnee nazar utaar loon. There are very rarely songs in which the acting
matches the depth of the melody lyrics and music. This is one of those rare
ones.

sunjay sand on Thursday, August 20, 2009
Movie is Saudagar ...came in , i think 1974, Bachhan was a star by then,
and this was one of his memorable clasica, without the " angry young man "
tag. Others being, chuppke chupke, mili, do anjanee, and alaap.. sorry
about padma khanna...this was her last non vampish role, but was she a
treat to watch in Johnny mera naam, or not ?,...ss vamps should be
vamps.

Moti Lalwani on Thursday, September 16, 2010
@parakh It has been a common practice in many movies to show fire and
connect with the scene/actor. In this case she is in a happy mood waiting
for him. When they show fire from closeup, I connect it that way. As
regards the juice, u r 100% right. I have seen the picture a number of
times. It is a clean and good movie and Nutan's acting takes the cake. Best
wishes. 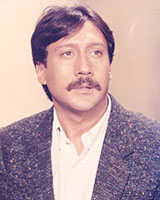