Average Rating : 4.44
Total Vote(s) : 52
Please rate this song between 1 star and 5 stars (5 stars being the best). Just move your mouse on the stars above and click as per your rating. Your rating will really help us to improve our website. 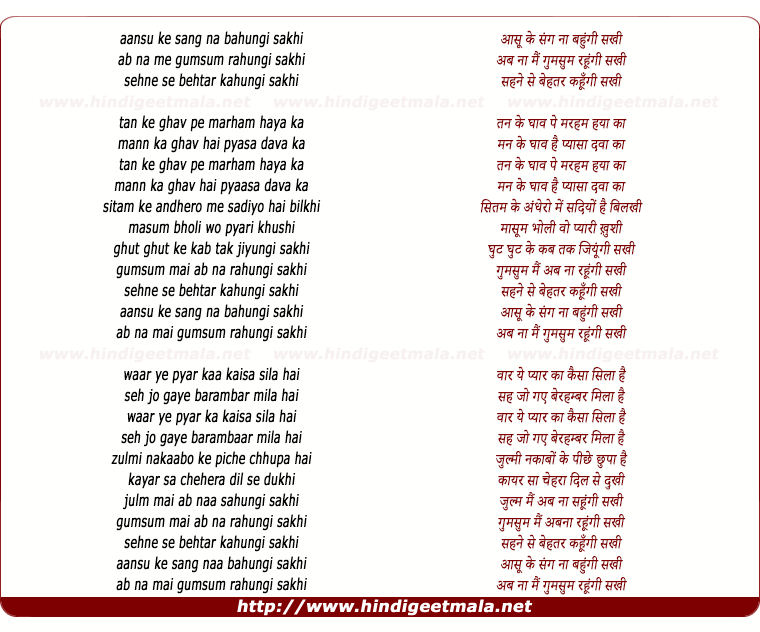 youngest heartthrob on Friday, July 06, 2012
I'll not flow in tears o friend, I'll not be silent o friend. Better than
bearing, I'll speak, o friend. On the body's wound, there is ointment of
shyness, The wound of heart is thirsty for a medicine.. Tann ke ghaav pe
marham hayaa kaa Mann kaa ghaav hai pyaasaa davaa kaa In the darkness of
torture, for centuries That innocent, lovely happiness has cried. How long
shall I live in suppression, o friend

reggi1204 on Sunday, June 17, 2012
Thank you for a great wonderful song...beautful voice...heart
rendering..makes me feel bad for those moments even whn u have got angry at
your spouse..your girls..or your mother..they don't deserve your
taunts...but your love..your support..your gratitude..your affection..each
of them make your world a better place..they truly deserve our Love and
Respect!!! Thank you for this lovely song!

RK KH on Sunday, January 20, 2013
This is a Song against Domestic Violence. The girls is conversing with her
friend (sakhi called in Hindi) and saying she will not spent her life in
tear any more, will not become a victim of violence, rather will speak out
and will stand against. That's the theme of the Song.

Ria Sood on Wednesday, July 04, 2012
well i'm not actually prperly indian i live in the UK so my hindi is not
perfect if there is a particular bit you would like me translate I can try
. if you find the lyrics for it paste it on google translate and then
translate it into english