Average Rating : 4.39
Total Vote(s) : 18
Please rate this song between 1 star and 5 stars (5 stars being the best). Just move your mouse on the stars above and click as per your rating. Your rating will really help us to improve our website. 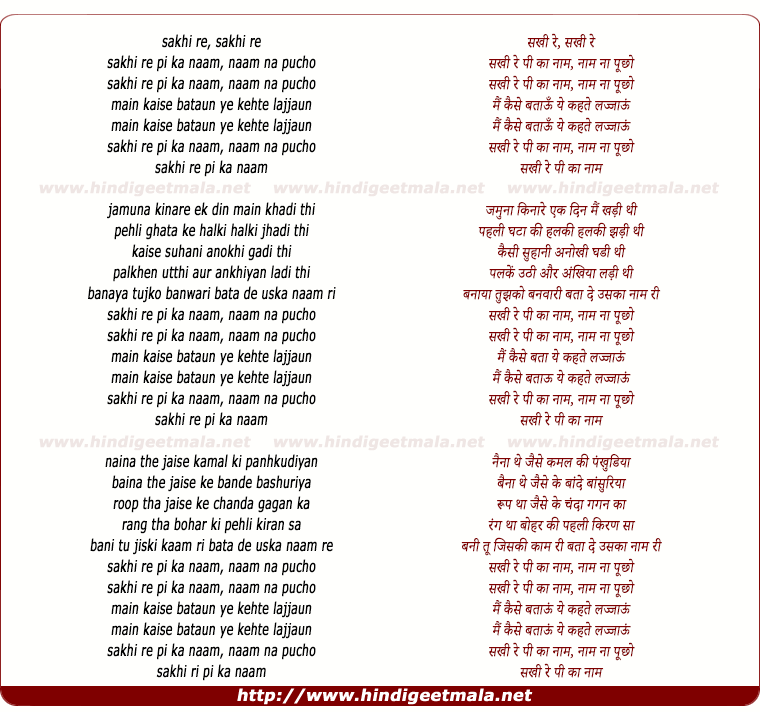 Comments on song "Sakhi Ri Pee Ka Naam"
bharat raval on Sunday, May 25, 2014
All songs of Sati Savitri are great and immortal: (1) Tum gagan ke, (2)
Kabhi to miloge, (3) jivan dor tumhi sang, (4) Itni jaldi kya hai gori, (5)
Mohe lutke na jana, (6) sakhi ri pi ka naam naam na puchho: total 6 great
songs. Magic of LP with devine voice of Lataji. Order from sweetness of
voice of Lataji: 3, 6, 1, 2, 4, 5 Listen all and give your own order and
interestingly check with this my order whether yours agree with it or not.
I salute to Lataji, LP and Bhart Vyas and thanks Ajay Yuvraj and other
friends who had uploaded them on YouTube.﻿

super ply on Tuesday, November 05, 2013
Beauty of melody, nice lyrics by Bharat vyas ji..l.p.shown his class by
these film..later he gave us lots of classical songs..

jayshaikh123 on Tuesday, September 20, 2011
brings back nostalgic memories; i wish those days can be brought back through a time machine.
Jagjit Singh Ishar on Tuesday, August 13, 2013
Very sweet & melodious one. All songs were super duper hit & very very
melodious.