Video of this song from youtube
Average Rating : 4.47
Total Vote(s) : 19
Please rate this song between 1 star and 5 stars (5 stars being the best). Just move your mouse on the stars above and click as per your rating. Your rating will really help us to improve our website. 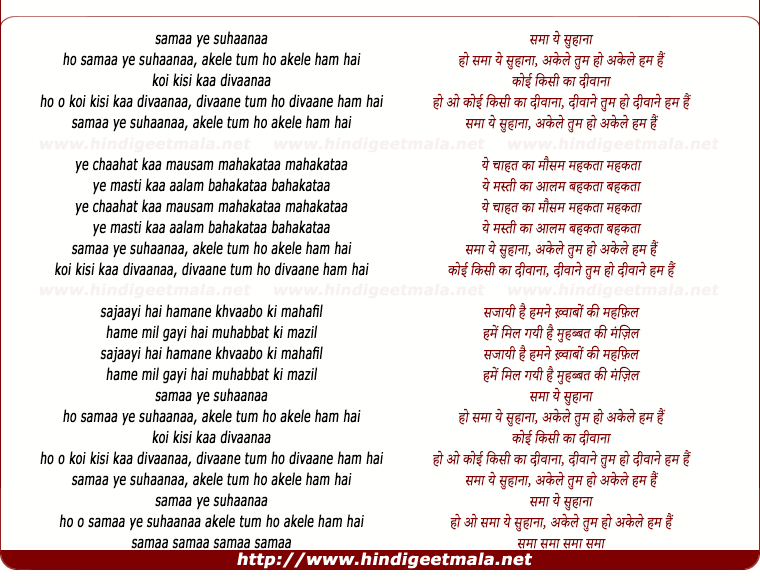 Comments on song "Shama Ye Suhana, Akele Tum Ho, Akele Hum Hai"
Ravigovindarajan Govindarajan on Wednesday, December 10, 2008
This is the best song ever made in melody form in hindi as oppsoed to jarry
and noisy drums and only guitar made a good presence. very very nice. I
thank the uploder yoyet18 for uploading this song. I was serarching for
this song for almost one and half year. wish that guy best of luck. thanks

Arif Attar on Tuesday, July 29, 2008
I think it is actually, 'Sama Yeh Suhaana' Singers - Binju Ali and Anupama
Deshpande Music - Biddu Actors in the song - Binju Ali and Juhi Chawla
Other actors - Kumar Gaurav, Ashutosh Gowarikar (who plays the negative
character) The movie was not bad as well. Thanks a lot.

tintinsam on Tuesday, January 20, 2009
The movie name is Goonj released in 89 and it also cast Kumar Gaurav, he
dies in this movie. Based on Drugs, he dedicated to Sanjay Dutt. College
guys taking drugs and what happens thereafter. Kumar Gaurav was higly
appreciated but the movie was a huge flop

tintinsam on Tuesday, January 20, 2009
A song from this movie "Jawani ke din" was a huge huge hit..Kumar Gaurav
riding bike singing this song. All four main characters were present in
this song..You guys can download this movie from Torrent or any magnet link
from torrentz...best of luck

shaswat78 on Sunday, July 13, 2008
Million of thanx for adding this wonderful song..I had the C D of the movie but lost it..I really missed this classy song a lot..can u add the other song from the movie-"ye jawani ke din he pyaar kiye jaa""..Many thanx again..
View all 70 comments related to song Shama Ye Suhana, Akele Tum Ho, Akele Hum Hai
Popular Links on HindiGeetMala