Video of this song from youtube
Average Rating : 4.32
Total Vote(s) : 1122
Please rate this song between 1 star and 5 stars (5 stars being the best). Just move your mouse on the stars above and click as per your rating. Your rating will really help us to improve our website. 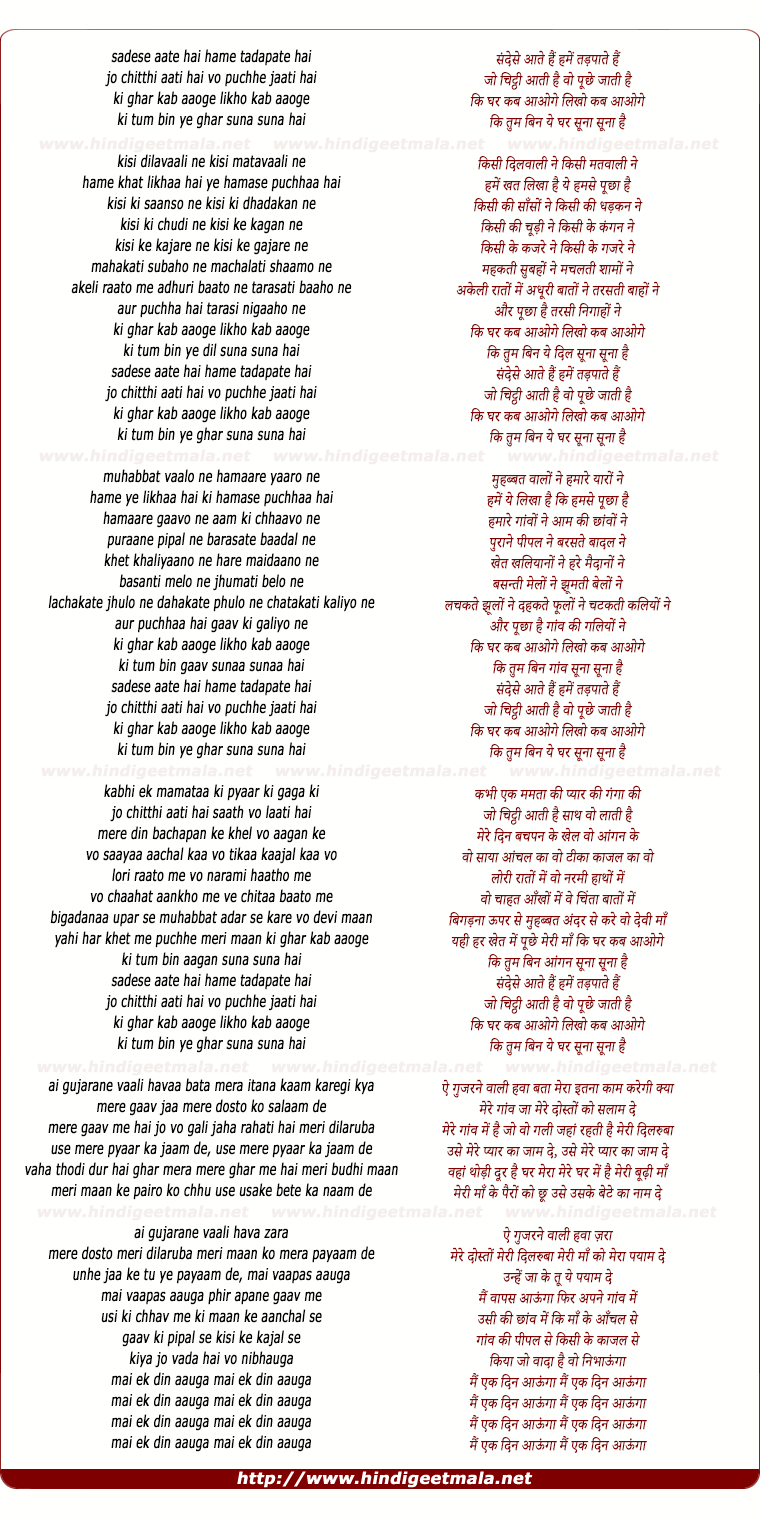 Comments on song "Sandese Aate Hain, Ki Ghar Kab Aaoge"
gaurav448 on Tuesday, June 16, 2009
I dont want to know the details about Islam either. Keep those to urself. I
mentioned some basic facts which are applicable to each and every human
being on this planet, irrespective of his/her religion. Koi religion kisi
ko jannat nahi naseeb karata hai. Jannat ya jahannum apne achchhe ya bure
karmo se naseeb hota hai, and this is applicable to each and every human
being - irrespective of religion. The bottomline is - God has created
humans, not any religion. Religion is the creation of humans

gaurav448 on Monday, June 15, 2009
There is one and only one Creator of the entire Universe. U read namaaz in mosques, We do aartis in temples, Christians sing carols in Churches, and Sikhs narrate shabads in Gurudwaras - but does that mean we are worshipping different Gods? - No, Never. We all are praying the same God - only the way of praying and names are different. The day people will realize this truth - they will stop fighting in the name of religion. Thats why I say, pehle apne watan se pyar karo bcoz thats ur motherland
Trip75 on Sunday, March 30, 2008
This song in its truest form is about family and duty and both of which go
hand in hand. Regardless of who we are and where we come from the sense of
Family and patriotism is at the core of every human being. It is what
defines us and has maintained us since the dawn of time. I just hope that
one day the world will be at peace and we realize that when we wage war, it
is the families that become the biggest victims on both sides. Here's to
peace and cessation of hostilities!

infernus2911 on Thursday, February 24, 2011
Media sells it and we live the role! we have been living a life where we don't use our brains! God is blessing India with good fortune and i strictly believe that there should be peace all over the world! I am an Indian and i respect our values that teaches us to live with peace and harmony! my uncle has finally retired from army and he was colonel and he used to share many experiences of wars! he took part in war of 71! then he was young official! wars bring no good to anyone!
View all 575 comments related to song Sandese Aate Hain, Ki Ghar Kab Aaoge
Popular Links on HindiGeetMala