Video of this song from youtube
Average Rating : 3.93
Total Vote(s) : 27
Please rate this song between 1 star and 5 stars (5 stars being the best). Just move your mouse on the stars above and click as per your rating. Your rating will really help us to improve our website. 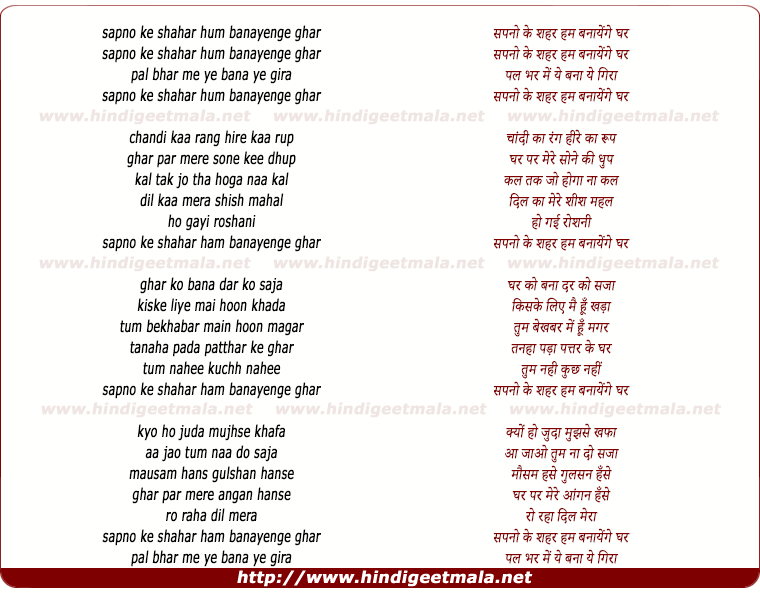 Comments on song "Sapno Ke Shahar Ham Banayenge Ghar"
maliks7 on Tuesday, September 28, 2010
Marvelous! I have no words,what a great song by Kishore,king of emotions,great lyrics excellent composition,simply the best.
sunny9366 on Monday, October 15, 2012
Absolutely amazing song..Heard it after 22 years..time passes by so
quickly. There are two other songs in this movie as I remember it -
1.Roothoo Na - Lata Mangeshkar 2. Jo Na Chhote Hain Na Bade - Kishore Kumar
and Shailendra Singh can someone upload them as well..

gauravendra80 on Thursday, August 05, 2010
Excellent song...first introduced to nearly all of us in NLIU hostel by Prashant Mishra (Misu)...and we were so mesmerised by it that we used to listen this song again and again at least for a dozen times in room no. 5.Adil, Jesu and Misu...and of couse me
Aryan Sharma on Friday, September 11, 2015
v p malik ji, of course it was G P sippy small budget movie made after
grand success of SHOLAY to avoid Tax on Sholay but this movie also turned
out to be a hit. Can't help when stars are favouring you . Kishore da the
great!﻿

krishmousam on Tuesday, March 22, 2011
listening to this video after exactly 25 years.. had sang and won a prize for this song..very close to the heart... tremendous voice and beautiful composition by BL.
View all 27 comments related to song Sapno Ke Shahar Ham Banayenge Ghar