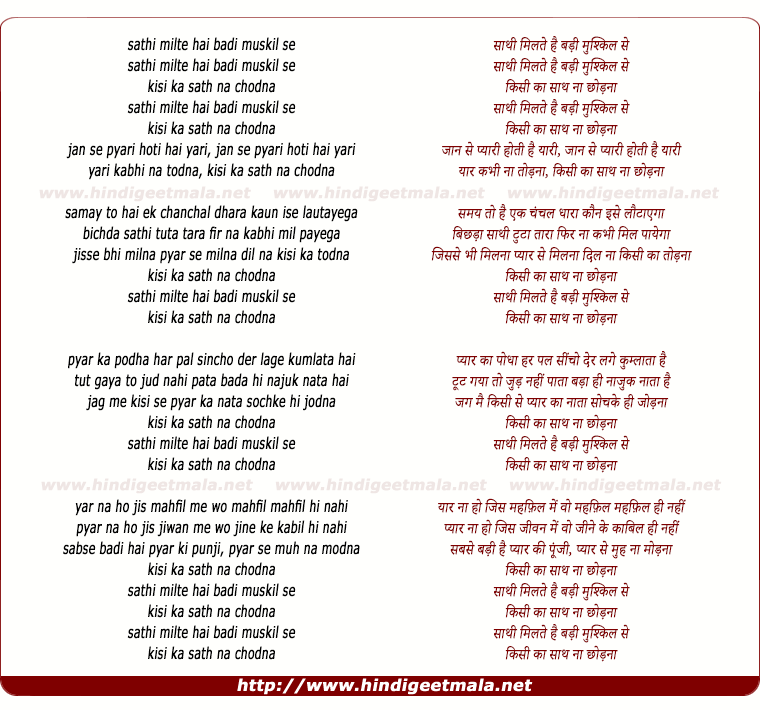 Comments on song "Sathi Milte Hai Badi Muskil Se Kisi Ka Sath Na Chhodna"
RealMusicKing on Saturday, December 25, 2010
Nice composition by Jaidev. Could be a tribute to SD. Jaidev and N. Dutta both assisted SD in 1950's. Sahir Ludhianvi had a quarrel with SD and asked N. Dutta and Jaidev to leave SD and that he would write for them. Jaidev refused as he was loyal and also because SD needed him since RD Burman was still very young but N. Dutta left and Sahir wrote for him for most of his films till the end.
Srinivasan Channiga on Sunday, December 26, 2010
Thank you for the information dear Ajay. You are right. N.Dutta and Sahir
came together and have given good songs in films like 'Dhool Ka Phool',
'Sadhna' etc.

madan vaid on Saturday, September 29, 2012
thanks for this class song in all respect lyrics tune &singing unable to
understand why so poor viewership one of the best song of kishoreda

Srinivasan Channiga on Saturday, September 25, 2010
Looks like a tribute to S.D.Burman who died in 1975 and with whom Jaidev
was associated for a long time.