Average Rating : 4.29
Total Vote(s) : 203
Please rate this song between 1 star and 5 stars (5 stars being the best). Just move your mouse on the stars above and click as per your rating. Your rating will really help us to improve our website. 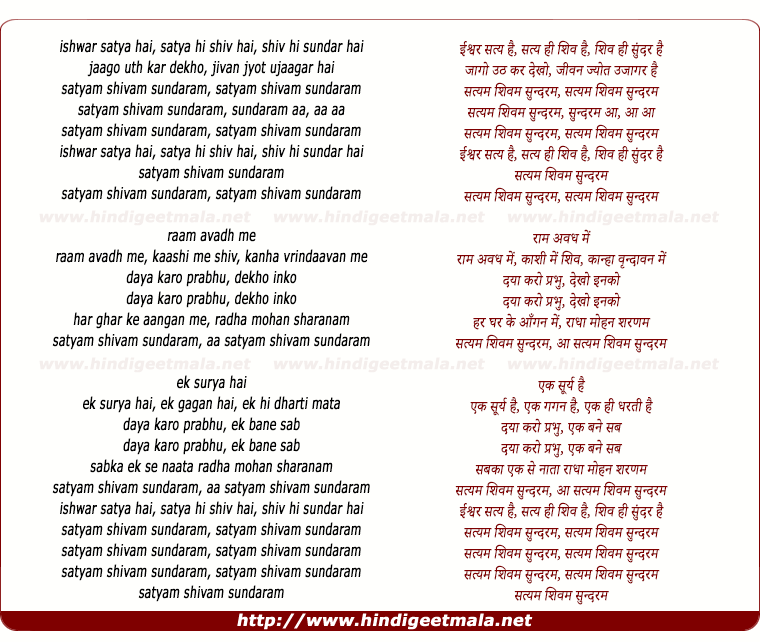 Comments on song "Satyam Shivam Sundaram"
janingrigory on Saturday, August 30, 2008
One of THE most beautiful, touching,& meaningful movies & songs in Bollywood history. AMAZING directing by Raj Kapoor, the visionary legend. As for the legendary & PHENOMENAL Zeenat Aman, an artist cannot get more beautiful, charming, mystical, spiritually magical, & mesmerizing than her. Face of a beauty queen, a statuesque body of a goddess, soul of a true artist,& the intellectual foresight of a progressive visionary!The film promoted the idea of humanity & empathy directed & acted PERFECTLY!
janingrigory on Friday, December 26, 2008
Well, in terms of the film, I think it has a great deal of depth, soul, and meaning - I find it so superficial and ignorant when I see some people post remarks criticizing the film because I think they fail to analyze the film on deeper, spiritual levels, & it's humanitarian message. As far as Zeenat, I'm a passionate person by nature so whatever I appreciate in life, whether it be art, an ideology, or a person, I show the appreciation with passion, poetry, and symbolism!I love creative writing.
janingrigory on Friday, December 26, 2008
Moreover, I love artists that are non-conformists & they take risks with their art as opposed to doing the same old thing that other artists do. I respect Zeenat's courage & individuality as an artist & the fact that she did meaningful films, taking on non-traditional & unconventional roles that other female artists were too afraid to take on during her time. She is a trend-setter, a pioneer,& an intellectual. I appreciate her intellect & courage the most. I can relate to those traits myself.
janingrigory on Sunday, December 28, 2008
Yes indiadil86, I believe that people judge films based on their own intellectual capacity so if they see and interpret things superficially, that means they are rather superficial human beings that do not dig deeper into their soul to find meaning in art. This film has so many different layers and is brilliantly directed and performed. I love the idea of "humanity" and "compassion for your fellow human beings" that it promotes. I'm truly touched by all your kind replies, thank you:)
janingrigory on Saturday, August 30, 2008
Anyone that would not see the complete magical beauty & emotion in this film has a very short-sighted way of looking at art & films! This movie, coupled with Raj Kapoor's splendid art direction & Zeenat Aman's superb performance, is a masterpiece of cinema to be treasured forever!

Thank you soooooo much for the upload of this glorious & divine song & video!