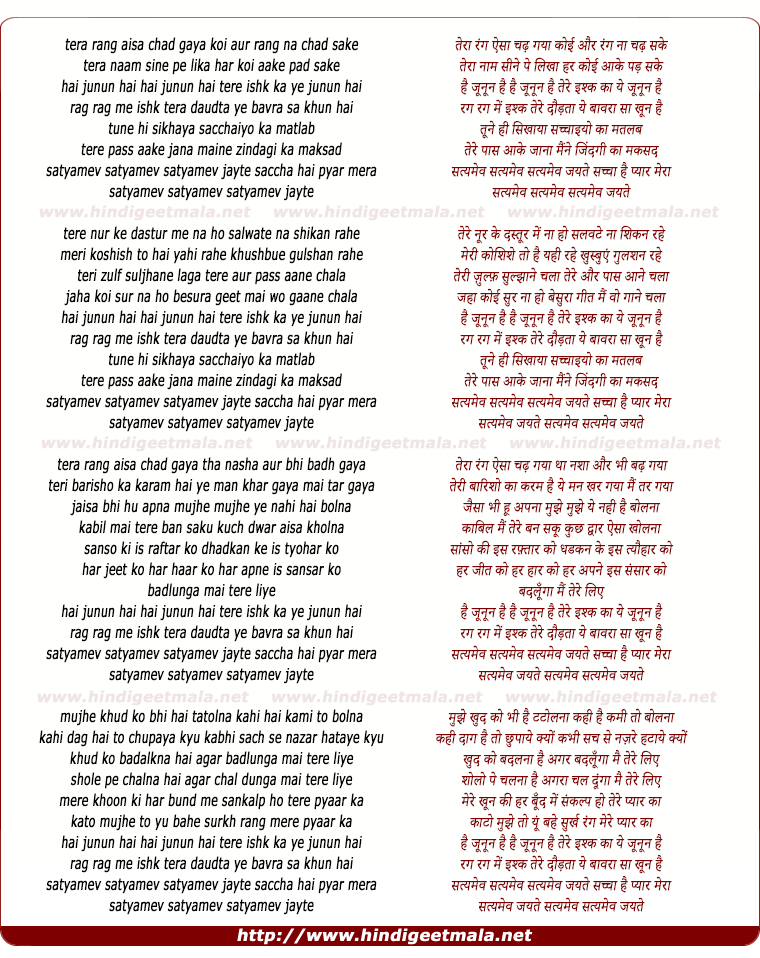 Comments on song "Satyamev Jayate Anthem"
Ammidi Madhu on Wednesday, May 16, 2012
If we ask children to shout when any elder is touching their private parts
then they will be in dilemma of what is that which we should not allow to
touch. Poor children why we are spoiling their nature. This is ugly. This
shows our cheap tricks to involve even children in this dirty thought
because no man is ready to change. So we are keeping the ravan alive and
safe and conditioning the innocent child and girls to a thing. This might
be a good start but I really believe this isagain a problem

thegreenmanalishi007 on Wednesday, August 15, 2012
This song always brings tears to my eyes. Irrespective of all the
criticism, I respect this show for helping us develop a conscience. This
show has acted as a wake up call which all Indians needed. Instead of
ignoring problems like child trafficking, corruption, gender
discrimination, we must selflessly fight against all these problems. The
question is not whether we should be proud to be Indians. The question is
whether India will be proud to have citizens like us? Let's do our bit. JAI
HIND!

Nikhil Crank on Wednesday, May 09, 2012
why is that every thing which Aamir does gets compared with SRK or with
Salman in that case and vice verse?? lets understand all 3 are different
individuals and all 3 have done a lot of hard work and are immensely
successful and lets respect that fact' its not always wise and justified to
compare everythng abt the show it looks more like a movie than reality with
tears flowing i don't knw why everything has to be so staged to make ppl
understand that there's an issue, thgh i wish it makes diff

Ammidi Madhu on Tuesday, May 15, 2012
Friend Amir is the key to all of us. No man in my view is nice or good or
any other saint like person. Man has never learnt the art of living and so
called being human. He was an half animal at time of early man's age and
now became a dangerous creature, more danger than any predator or devil.
All bad is hidden in our minds and we try to show our goodness. Today
people are not allowed to touch the plants in garden and not allowed to
carry the food items because they will spoil the greenery.

Shrey SS on Friday, July 27, 2012
Aamir bhai your show can be compared to your movie "Mangal Pandey" the
rising. I have great respect for your show. But i have a request. Our's is
a nation where an issue is not solved in decades and your each episode has
four parts. First part you throw an issue , In second you discuss with the
victims who suffered, In third you discuss with people associated with the
issue and in fourth you offer a solution. My request is that for each part
please take an episode because everyone forgets