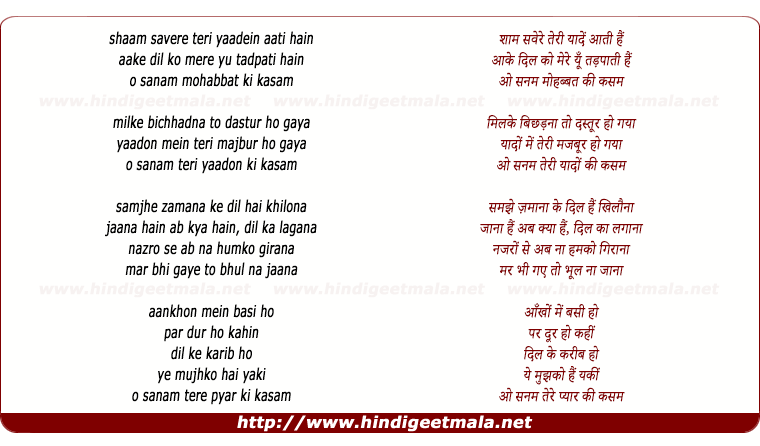 Comments on song "Shaam Savere Teri Yaade Aati Hai (O Sanam)"
Imran Hassan on Wednesday, February 13, 2013
i was 13 years old when i heard this track for 1st time, and dint had 45
rupees to buy this audio cassette, later my frnd advised that recording
into empty cassette can be done in just 2 rupees, i was so happy and went
out for audio recording shops for 1st time in my life to get this track,
unfortunately shop owner demanded 10 rupees in order to bring the original
cassette and wants me to record whole 10 songs, i managed 10 rupees in 3
days later...this is my love for this song

Raj Arora on Friday, February 03, 2012
@utubeview5 what i have understood. I might be wrong though. The colored
Scenes are from way past, where he is the ruler.. he sentences the guy to
death. Probably its the same guy who he is smoking a hookah with in the
intro scene. The guy gets locked up, and then his daughter sleeps with the
king to take the keys to free her father. She gets caught and eventually he
has to kill her. Basically 3 lifetimes are shown. The emperor, the
archeologist and the one singing the song.

Dhruv Arora on Sunday, June 07, 2015
Funny! an average Sunny Leone track has # of views in excess of 10
mil..what has happened to our taste of music?﻿