Video of this song from youtube
Average Rating : 4.44
Total Vote(s) : 55
Please rate this song between 1 star and 5 stars (5 stars being the best). Just move your mouse on the stars above and click as per your rating. Your rating will really help us to improve our website. 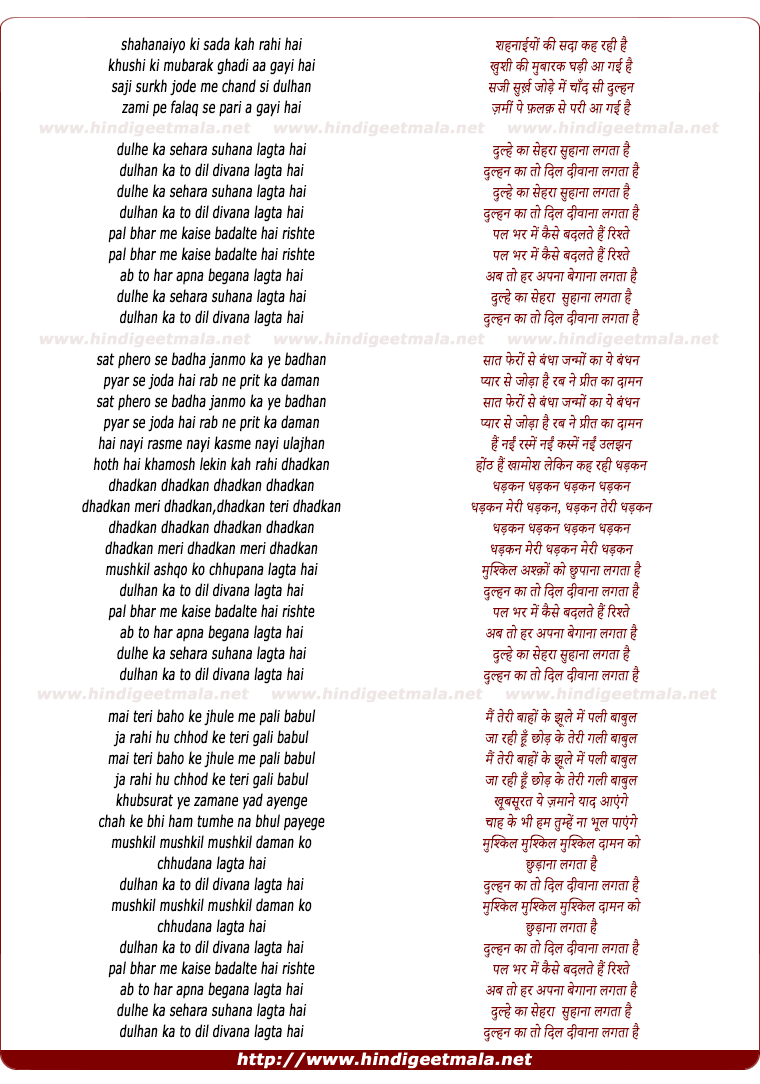 Comments on song "Dulhe Ka Sehra Suhaana Lagta Hai"
5aban2u on Thursday, April 23, 2009
love triangel. Shilpa(rich gal) was in love with sunil (poor guy) and she got forcefully married 2 akshay(rich guy) and sunil work hard n become rich n buy akshay company.. as sunil wnat shilpa back but now shilipa was in love with akshay... in end snil goes his way n hubbi -wife r happily married.. UFF i can be writer.. ;-)
htgajjar on Monday, December 06, 2010
@king101696 I agree that Indian Bride should wear Red Saree for wedding which is considered auspicious and Blue Saree is un-auspicious for wedding.

I have stopped watching todays Bollywood non-sense movies for many years now. I like watching the films of 50s, 60s, and 70s they were the Golden years of Hindi films.

trabandos on Thursday, February 11, 2010
Ow yeah .and LET'S NOT FORGET the greatest singer EVER of INDIA...MOHAMED RAFI!!!! I love those two.M.Rafi and Ali Khan!!! The best of the best!! May Allah soub7ana houwa Ta3ala have mercy on their soul and may come in paradise InshaAllah!!! Salam from Amsterdam...ADIL!
Lovinem14 on Monday, July 13, 2009
wow daz awesome. u wrote about the whole movie in jus soo little writtin. me, it wud probly take me 4eva jus to figure out how to write it in a short form lik urs. u cud be a writer ;)
sutil41 on Saturday, June 20, 2009
I looove this song very much!!!
i wish i can understand every word,but just looking at this video i can figure out.