Video of this song from youtube
Average Rating : 4.27
Total Vote(s) : 15
Please rate this song between 1 star and 5 stars (5 stars being the best). Just move your mouse on the stars above and click as per your rating. Your rating will really help us to improve our website. 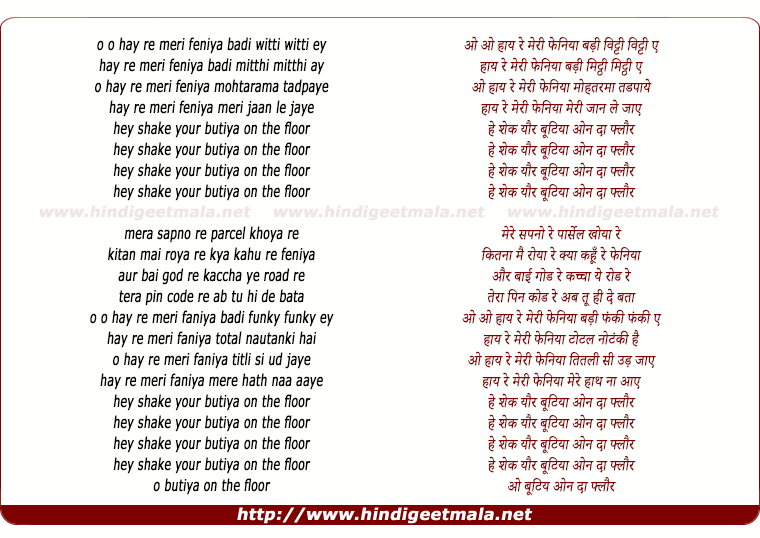 Comments on song "Shake Your Bootiya"
Ritika Ritu on Thursday, August 28, 2014
i think this movie is going to be interesting, the songs aren't awesome but
they're good, I really wanna watch this movie, this is a new topic not like
other movies : one love story like others, and the audience needs a change,
just as a person cannot eat the same food everyday we cannot even watch the
same kind of movie everyday. So I say this isn't going to be flop, this
would be a hit maybe not a superhit but a hit.﻿

combardus on Tuesday, June 23, 2015
This is a very thoughtful and clever movie, that an average person would
have to watch more than once to clearly comprehend. Personally, its a
fantastic movie. Too bad I'd didn't do as well as, say, Chennai express,
which was basically trash when compared to this movie. I just wish that
this movie had gotten more recognition, but probably its just been made for
a wrong crowd.﻿

Aditi G on Monday, August 25, 2014
This film may be different for indian cinema, but these kind of movies are
fairly common in hollywood. Reminds me of the hangover series and nebraska.
Looking forward to watching it. And a lot of people who are criticizing it,
peepulz, lets hold our horses until the movie comes out, yeah?﻿

akshay dinani on Friday, August 22, 2014
The song doesn't matter! The video is so attractive and innovative!
The Expressions of all the lead is just tooo cute and adorable! :D﻿

Kruti Shah on Friday, August 22, 2014
That was hilarious and such a unique idea! Love the doll-house concept :)
this is going to be such a quirky fun film :D﻿

View all 158 comments related to song Shake Your Bootiya