Video of this song from youtube
Average Rating : 4.34
Total Vote(s) : 29
Please rate this song between 1 star and 5 stars (5 stars being the best). Just move your mouse on the stars above and click as per your rating. Your rating will really help us to improve our website. 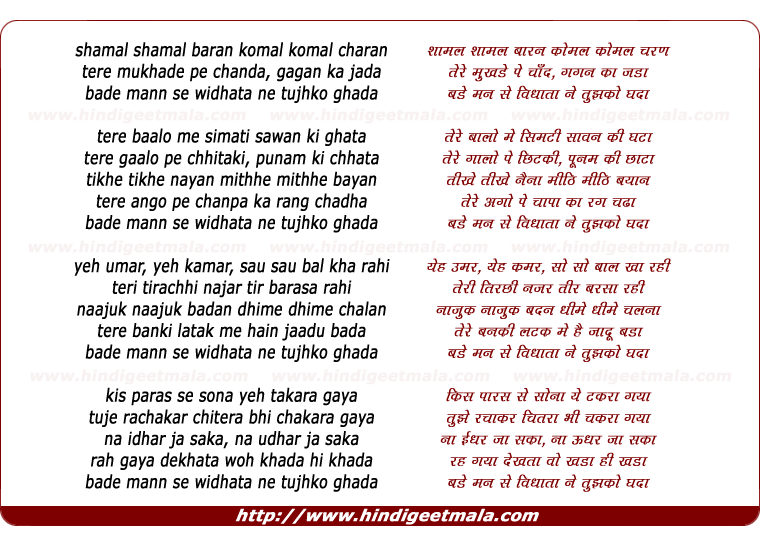 Comments on song "Shamal Shamal Baran Komal Komal Charan"
RituPM :) "StayWellWithin" :) on Sunday, July 03, 2011
1:02 "Shyamal -2 baran, komal-2 charan.." Oh what a rhythmic cadence, &
superb Music this delightful song has, & funny thing this one feels closest
to home, lol, as quite often I've found myself dancing to such rhythmic
Music "while" am in the kitchen cooking away to the beat therein ! lol :)
Btw, it's funny how she seems SO envious of this "Mohini" her beloved hubby
keeps singing about, not even wanting to "know" who she is, when the poor
hubby who adores her, is trying to tell her ! :) Aww! :)

Janak Payal on Tuesday, June 30, 2015
A song par excellence. What choreography ! Fantastic lyrics and the music
oh ! no words. CR you are a genius. I am not a great fan of V Shantaram's
movies. Sandhya dances well. Mahendra Kapoor rises to the occasion and
lends a touch of his own to the song.﻿

ravi7550 on Wednesday, August 05, 2015
Really poetic expression of love in pure Hindi,which only Pt Bharat Vyas
could have created.The music by C.Ramchandra is awesome.
The song is simply fabulous.
Ravi Sinha﻿