Video of this song from youtube
Average Rating : 4.36
Total Vote(s) : 22
Please rate this song between 1 star and 5 stars (5 stars being the best). Just move your mouse on the stars above and click as per your rating. Your rating will really help us to improve our website. 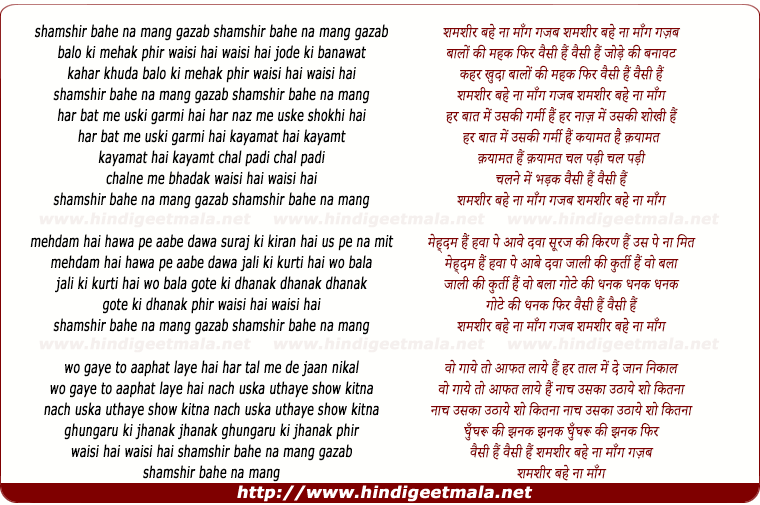 Comments on song "Shamshir Berehna Maang Gazab"
tarnicles on Friday, April 29, 2011
@malangi13 what do you mean? the 'phool' illustration betrays your
ignorance. Phool is a Sanskrit word and Urdu wasn't born on the 14th of
August,1947. The 'ph' in phool requires a chashmi 'he' attached to a 'pe'
when written in the Urdu script and this testifies to its non-arabic/farsi
origin.Urdu developed on this land of Ganga-Jamuni tehzeeb. You cant'
change history by simply ignoring it. Urdu remains a brilliant mixture of
languages despite you failure to acknowledge the same. Grow up.

tarnicles on Friday, April 29, 2011
@malangi13 I never disputed the meaning of "urdu". I just said it was
nurtured on the Ganga-Jamuni soil ( Awadh- Faizabad,
Lucknow,Malihabad,Bareily,Saharanpur and Delhi). I really think you need to
marshal your thoughts. Hyderabadis don't speak urdu, they speak dakkhani.I
hope you know what dakkhani is. Lahoris on the other hand pretend to speak
chaste Urdu.

malangi13 on Friday, April 29, 2011
Loading up a donkey with Geeta does not turn him into a Monk. So you have signs in all languages. In the Unites States you have streets and shops in English, Arabic, Spanish, Urdu, Chinese, Japanese .. so what !! Your degree is from Bhatinda because you dont make sound arguments.
Kamayani Bali Mahabal on Monday, October 04, 2010
vo gaaye to aafat laaye hai sur taal me.n leve jaan nikaal naach us kaa
uthaaye sao fitaney ghungharuu kii chhanak phir waisi hai