Average Rating : 4.10
Total Vote(s) : 42
Please rate this song between 1 star and 5 stars (5 stars being the best). Just move your mouse on the stars above and click as per your rating. Your rating will really help us to improve our website. 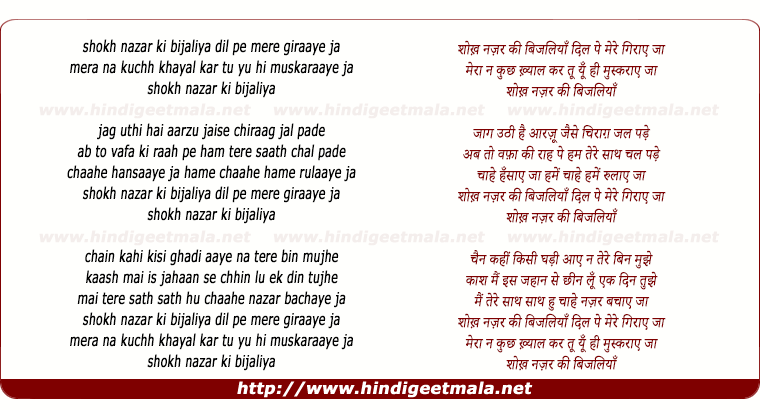 Comments on song "Shok Nazar Ki Bijaliyaan Dil Pe Mere Giraae Jaa"
RealMusicKing on Thursday, August 11, 2011
Well in that case, Professor would be the only film of Shammi where played double role. As a bearded professor and as the lady in "blue color tight fitting kameez". : )
muhammad kamran on Friday, February 27, 2015
Just for other viewers, the Tamil Movie was a remake of the Hindi one.
Madan Mohan is an Original Legend. A rarest of rare composers, in front of
whom, entire country's composers bow down till date. I remember I think
Naushad once told, for Madan Mohan's one single composition of Appki Najron
Ne Samjha, Naushad would love to dedicate all his compositions to Madan
Mohan. Seems as if, GOD himself was sitting beside him when he composed
songs. every single piece a master pi

Jamie Kaur on Wednesday, August 10, 2011
@RealMusicKing I think you are a guy with sense of humor. I noticed it once
when you commented on Kishore Kumar in the song of "Pyar kiye jaa". About
Parveen Chaudary i want you to watch the song" Yeh umar hai kya rangeeli"
of "Professor" movie. She wore blue color tight fitting kameez. Watch her
figure, her charming gait, her grace and beauty. I am sure you will forget
Shammi Kapoor.