Video of this song from youtube
Average Rating : 4.06
Total Vote(s) : 18
Please rate this song between 1 star and 5 stars (5 stars being the best). Just move your mouse on the stars above and click as per your rating. Your rating will really help us to improve our website. 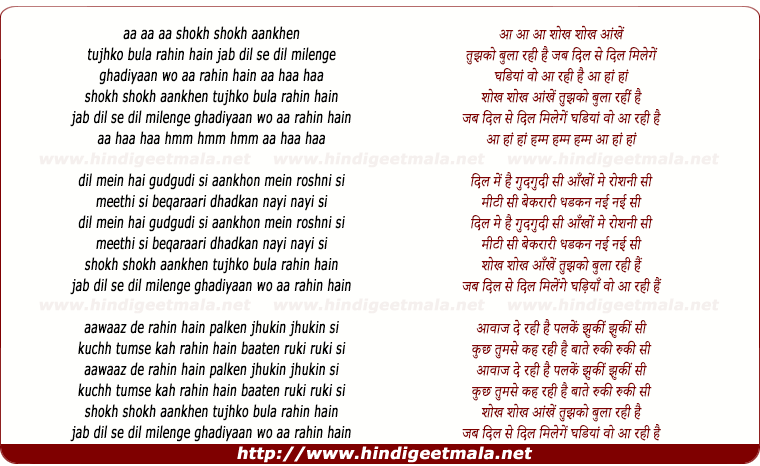 Comments on song "Shokh Aankhen Tujh Ko Bula Rahi Hain"
1arshiakhan on Tuesday, March 29, 2011
Its all same my dear. Like sometime we say Kishor Kumar and don't write the
'E' and sometime Mohd.Rafi, Mohammed or Mohammad Rafi. But they're not
wrong at all. We can even call it Bhonsle or Bhosle. Its actually the way
we spell or write it :) But to me the more intriguing question would be
that is why Asha not Mangeshkar or Burman but Bhosle? As she belongs from
an Mangeshkar family and later married to the Burman family. So why is she
never called or credited anywhere as Mangeshkar or Burman

MrJoethedead on Tuesday, March 29, 2011
@1arshiakhan Thank you for your answer - still, there seems a bit of a
difference between having an 'n' in your name and not. Like if I was called
Joe or Joen - bit of a difference... Mr Rafi is still Mohammed, just
different ways of spelling it - and different ways of saying it - but it's
still recognisable as a similar name. Is Bhonsle and Bhosle pronounced the
same? Still there we go. I like the 'my dear' bit - nice touch... :)

MrJoethedead on Monday, March 28, 2011
Love a bit of O.P. Nayyar, me. Slightly off-topic question but why is it
Asha Bhonsle and then Asha Bhosle? Intriguing...