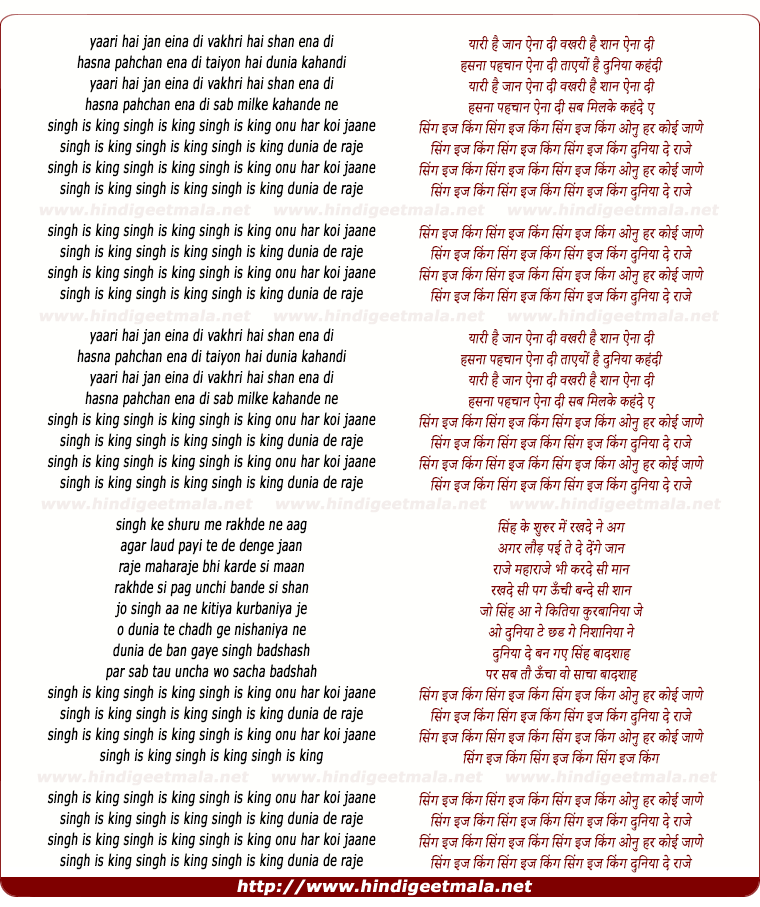 Comments on song "Singh Is Kinng"
baxterrani on Monday, September 08, 2008
kris, I agree with you. Music is universal, it brings joy, it's not meant to fight over. We're all humans, let's just behave like ones and enjoy the song. One reason I love this song is that Indian music is crossing cultural boundaries and being appreciated outside Indian borders. Similarly, we're experimenting with other styles. This song has such a powerful message of unity and acceptance in that sense, that it's sad to see some of the comments here. Music is about bringing people together.
101nk101 on Monday, July 07, 2008
lol heard it wasnt easy idea came from RDB at IIFA 2007 backstage, when
akshay was talking about the movie, Akshay wanted to combine his roots with
the western fusion (i guess he wanted to hit the international market), RDB
suggested the king of hip hop himself Snoop doggy dog. I heard it wasnt
easy, snoop def wanted to hit the indian market, but wanted to with a bang,
didnt know if this was it, several meetings were held to assure him this
would be huge. We gotta wait and see now lol

sirsalmanrushdie on Tuesday, August 19, 2008
"Singh is King" is a very bold statement and others are not going to
appreciate it. So the makers of this film should aim to JUSTIFY the use of
this title. Sadly, they failed to so justify. The film shows the good Singh
as dumb, careless but emotional person. Moreover the King is a bad person
here. At the end of the film, nobody wants to be King. So, why Singh is
King? At least show that the Sikhs will fight not only for themselves but
for others too, as can be seen historically.

The12thGuru on Wednesday, October 01, 2008
If every 1 of the worlds powerful countries had a Sikh President or PM, the worlds people would benefit greatly. The Sikh faith is one that respects difference and without fear of violent aggression between nations, arms races and fear based politics could be replaced with hope and equality. The amount of money spent on military weapons research alone could feed and provide healthcare to every person on the planet. Singh is a great man, and as an american sikh, hes an inspiration.
anishadasoar on Saturday, October 04, 2008
Star Voice of India, Ishmeet Singh was murdered! There has been much evidence found

Type in Justice for Ishmeet Singh in Google.
Then look at the blogspot website.

Why is there a blood clot and linear cut on Ishmeets body?

Why Ishmeet was wearing the same clothes in which he was last seen at the Maldives airport?

Why Vyom, Arunima, Sanjit Shah, and Hassan Ishaan gave contradicting statements to the Indian high commission and the Madives police?