Video of this song from youtube
Average Rating : 4.50
Total Vote(s) : 46
Please rate this song between 1 star and 5 stars (5 stars being the best). Just move your mouse on the stars above and click as per your rating. Your rating will really help us to improve our website. 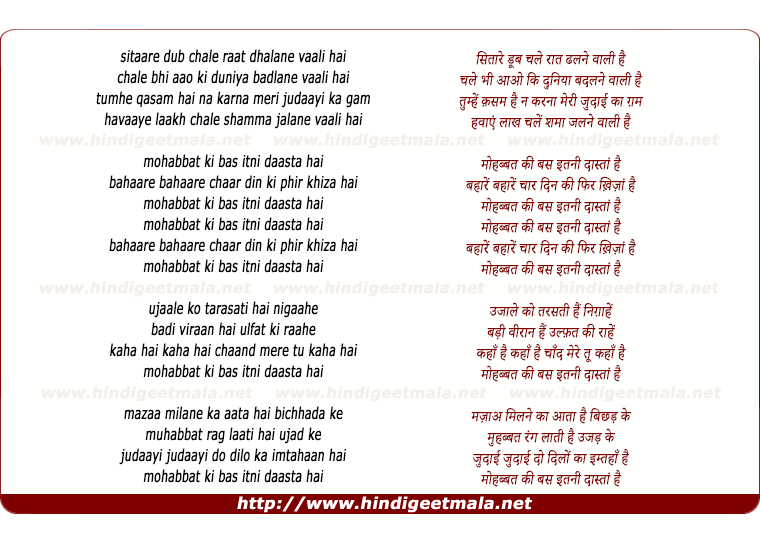 Comments on song "Sitaare Dub Chale, Mohabbat Ki Bas Itani Daastaan"
MrDilipcoulagi on Saturday, December 05, 2009
God knows there was always confusion between the much better known and successful Naushad and Nashad (I also wonder why he took that name - can't be his real name!) BTW a google search shows most sites saying the music director was Naushad.
araniees on Saturday, May 15, 2010
Yes many sites are actually not familiar with Naashaad films ( Not listeners of that time ). Baradari & Nagma are Super hits of that jamaanaa , music given by Shakath Ali , who adopted the name Naashaad - Arani Apparao-Hyderabad-A.P.
S Qasim Hasan Zaidi on Thursday, November 20, 2014
Wah! Kitni soft aur khoubsoorat composition hai. Aaj achanak zehan mein ye
geet aaya aur jab search kia to Mahale ji se mulaqaat ho gayi. Thank you
Mahale ji for the upload. You are a true music lover.﻿

Bajaury on Wednesday, January 20, 2010
However, Naushad always used Shakeel Badayuni and no other lyricist. That
would suggest that Naashad is the composer and not Naushad. Whoever is the
composer, the song is a gem and deserve 5 stars.

Bajaury on Wednesday, January 20, 2010
"Old Classic Hindi Songs" says the music director is Nashad, however, the
music suggests the unmistakable print of Naushad. Listen at 1:54 and at
other segments. This is Naushad's signature.