Video of this song from youtube
Average Rating : 3.50
Total Vote(s) : 4
Please rate this song between 1 star and 5 stars (5 stars being the best). Just move your mouse on the stars above and click as per your rating. Your rating will really help us to improve our website. 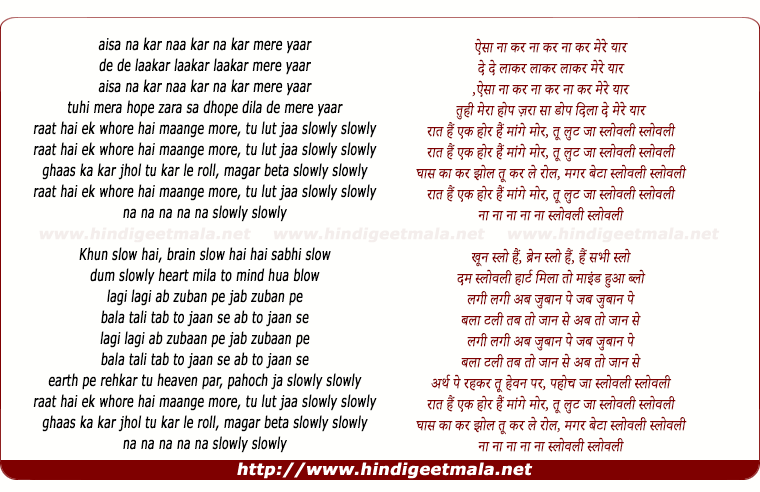 Comments on song "Slowly Slowlyy"
dheraj kanchan 123 on Tuesday, May 14, 2013
please make some more movies based on same fiction, ideas A grand respect
for directors and writers. plz bring some more kind of this movie let
bollywood will spell first in our mouth than hollywood..let make this
happen. Guyss support this kinda movie. everything was something different
( songs, dialogue -hellyeah, adventurious ) last word but not least - thoko
like to bring me on top of comment ( not for childish publicity just a
support for something different )

Tanmay Jagdale on Monday, May 13, 2013
Dude, you are questioning me for my comment and giving the answer yourself!
Please check and ponder once again whether daa rupaai and daha rupai sound
close enough or NOT! Furthermore, it is written in same 'devnagri' script
just like Marathi!!! For more information, please refer: Wikipedia Article
on Marathi Language Note: please check the point 4.5. I guess this much is
enough to clear your doubt about the great Marathi Language and it's
dialects :)

Tanmay Jagdale on Friday, May 10, 2013
Thanks for sharing your half minded and half hearted views. Also, I can add
to it that they are half informative. FYKI, the culture of Goa that
exhibits right now is not the original one. The real culture of Goa is
supposed to be based on the original Maharashtrian Culture since it is
nothing but a part of the Konkan Coastal Area thus a part of 'Greater
Maharashtra'!!! The Konkani spoken over there is nothing but a dialect of
Marathi!!!

Pravin Bhat on Friday, May 10, 2013
We Thank Nehru for freeing Goa from Portugal but as he promised it would be for Goans to decided whether we want to join Indian Union and that is as per International Law of " Indigenous peoples right for self determination" Goans invied Nehru to Liberate us not free us. Or else America could have occupied after they drove Sadam Hussien out of Kuwait
hitesh dsouza on Sunday, May 19, 2013
Dude its just like saying Portuguese and Spanish are same language which
they sound but not are,konkani not only has dialect from Marathi but also
other languages ,it varies with region.like here in Mangalore we have
Kannada dialect,infact if you look up,you see that konkani is older than
marathi.