Video of this song from youtube
Average Rating : 4.76
Total Vote(s) : 33
Please rate this song between 1 star and 5 stars (5 stars being the best). Just move your mouse on the stars above and click as per your rating. Your rating will really help us to improve our website. 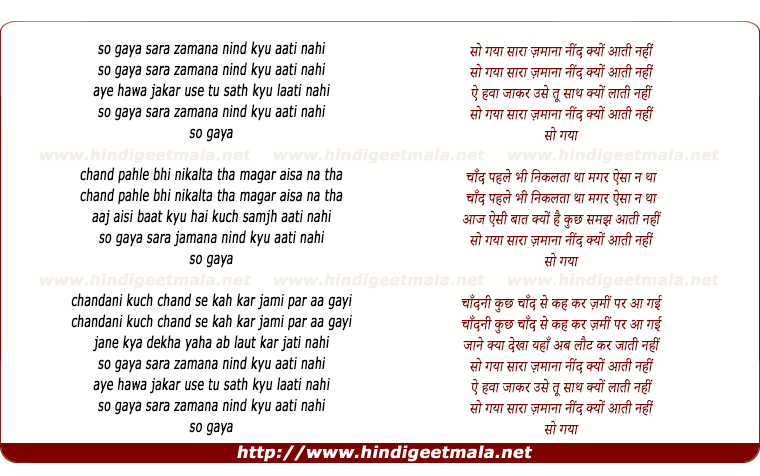 Comments on song "So Gaya Sara Zamana Nind Kyu Aati Nahi"
Mani Menon on Monday, May 14, 2012
Dear 'rumahale', it's not 'Jaimini' Ganesh but 'Gemini Ganesh'. He may have
been virtually unknown to the Hindi film goer but he was a very well known
actor in Tamil movies. By the way, he is the father of Rekha! 'Miss Mary'
was a very good comedy. And Meena Kumari shone in it. Such a pity that she
got stuck in tragic roles!

rumahale on Saturday, April 06, 2013
Glad to know your liking since school days; the song mentioned is evergreen
one, and, this one is also beautiful. Thank you for nice comments.

rumahale on Tuesday, May 15, 2012
Thank you. I am since corrected. It was in fact an inadvertent error.
Thanks also for nice comments.

vinay k joshi on Saturday, April 06, 2013
I heard Miss Mary's songs from 78 rpm HMV record in 1958 onwards till 1966,
when I was in parent's house as a scoolboy. I specially remember Vrindavan
ka Krishna kanihya.

rumahale on Tuesday, May 15, 2012
This is excellent information for me. Thank you.