Average Rating : 4.34
Total Vote(s) : 38
Please rate this song between 1 star and 5 stars (5 stars being the best). Just move your mouse on the stars above and click as per your rating. Your rating will really help us to improve our website. 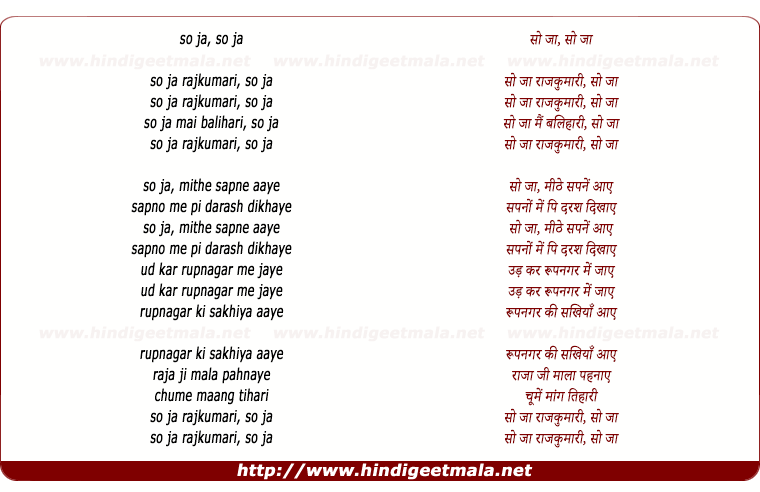 Comments on song "So ja Rajkumari"
kirti kumar Khanna on Thursday, December 09, 2010
what will happen when you will leave us no no no i dont want to have this
in my life lata jee aap saraswati hai how marvellously you have sung this
.toba .when ilisten your songs even 55 years old to jan nikal jati hai
.remeber classical duets with manna day pi bin suna jee then madan jee film
anil biswas naushad roshan sahib and sajjad hussain . all these composers
without your voice only upperwala jane

ved prakash on Monday, April 30, 2012
Saigal's original has no comparison in quality and depth, emotions of
voice, Lata is not even close to Saigal. After all, Lata treats him as his
Guru, and Guru is Guru as far as Saigal is concerned. Whole lot of
generation which followed Saigal, initially imitated Saigal but invain and
not succeeding in that made their own styles like Lata, Rafi, Mukesh,
Kishore, Talat, Hemant Kumar, C.H. Atma etc.

kkjb586 on Sunday, August 24, 2014
I agree with Mr Ved Prakash but Lata's version is also great. I am a great
fan of K.L.Saigal but Lata is Lata. She has done full justification to this
song. ﻿

10ZeeKay on Monday, January 03, 2011
It is extremely difficult to say who is better. These voices (Lata jee & Sehgal sahib) seem to be divine. Excellent
safronfield on Saturday, May 07, 2011
you can hear a thousand notes even when she talks- let alone sing.
View all 8 comments related to song So ja Rajkumari
Popular Links on HindiGeetMala