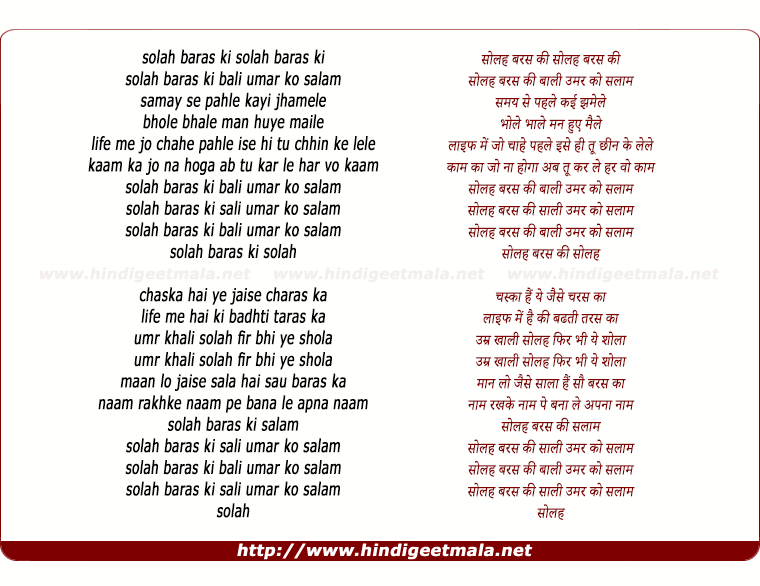 Comments on song "Solaah Baras Ki Waali Umar Ko Salaam"
mannat bakshi on Thursday, June 20, 2013
For all those losers, who are an example of hipocracy..just to let you all
know that with the changing times and the changing nature of life, this
part of cinema is necessary to enhance your lil dim wit brains..!! and
also, the members' of the indian cinema's censorboard have the right, the
experience and the knowledge to pass off a piece of art as such. So, the
next time you all want to behave like real critics .ONLY THEN COMMENT !!

tangerinebutterfly on Monday, September 16, 2013
well i am a normal individual with not as much "DEGREES" as you but my
common sense tells me that media is shaped by the opinion of people who use
it. and also no content that is not accepted by people can ever take the
shape of media. (eg. you don't have much intellectual content available
since people are not so intellectually oriented).Just Common
Economics you know.demand and supply.

tangerinebutterfly on Monday, September 16, 2013
Actually if you have watched this film closely it doesn't pass any
judgements on any of the activities that teens do. nor does it suggest any
thing. This is a realistic movie which is just portraying a common trend
and asks teens to just apply their brains for every decision they take...

rachana shah on Thursday, June 20, 2013
Super cool, loved it :) ppl who are talking of censor boards should be more
active when shahrukh is holding is crotch all the time in ra-one and it is
a movie for kids. And please, it is very real for those who feel kids still
play only Pokemon at sixteen.

Aneesh Menon on Wednesday, June 26, 2013
maybe for all you losers who go to cheap public schools think that this is
weird but im sure all kids who to good co-ed icse / ib schools will be able
to relate to this movie