We will add as soon as the video of the song is available.
Average Rating : 4.13
Total Vote(s) : 8
Please rate this song between 1 star and 5 stars (5 stars being the best). Just move your mouse on the stars above and click as per your rating. Your rating will really help us to improve our website. 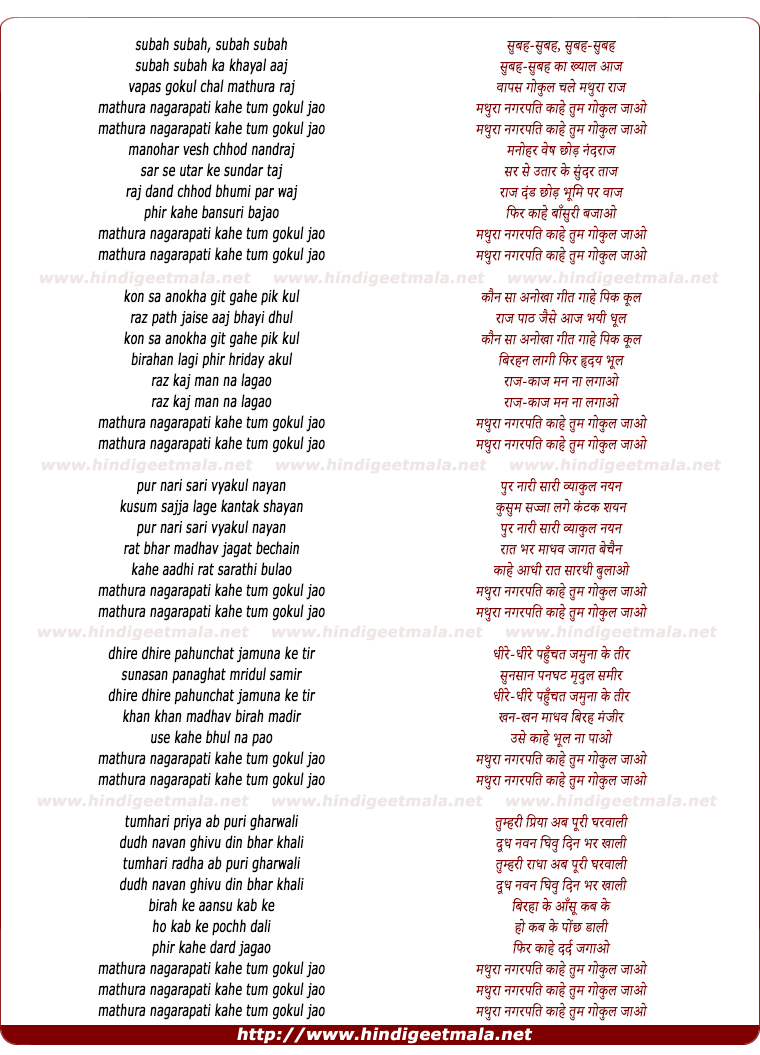 Comments on song "Subah Subah, Mathuraa Nagarapati Kaahe Tum Gokul Jaao"
dominator667 on Sunday, January 25, 2009
Definitely one of Bollywood's best movies, overlooked simply because of its unconventional nature. Aishwarya Rai delivered a wonderful performance. In my opinion, thanks to the actors, the beauty of the movie lies in the verbal and non-verbal interaction between the two characters. Through it, they unconvincingly attempt to showcase a happiness that could only be achieved w/o each other; done simply as a superficial means of consolation for their past biggest mistake. Beautiful!
Good Boy feeling Better. on Tuesday, October 05, 2010
This movie makes Ajay Devgan a man, not a hero. I feel that Ajay Devgan
has grown as an actor, since doing this film. This movie is a thriller, by
my estimation. The suspense, where there should be no suspense, makes this
movie very entertaining. This movie tells us, that we entertain ourselves,
nothing entertains us.

PunjabiBaadshah on Monday, June 29, 2009
After having visited India, I have realized that this movie is no where
near for the masses. Rather, it is intended for an intellectual niche,
whose life experiences may mirror, to some extent, those found in the movie
so that they may appreciate its beauty.

fred84399 on Saturday, December 08, 2007
well, she can't possibly be "so ugly" considering she was made Miss. World in 1994 and retitled "Most beautiful Miss. World of all time" in the year 2000. Something tells me somebody's a little jealous ...
View all 55 comments related to song Subah Subah, Mathuraa Nagarapati Kaahe Tum Gokul Jaao
Popular Links on HindiGeetMala